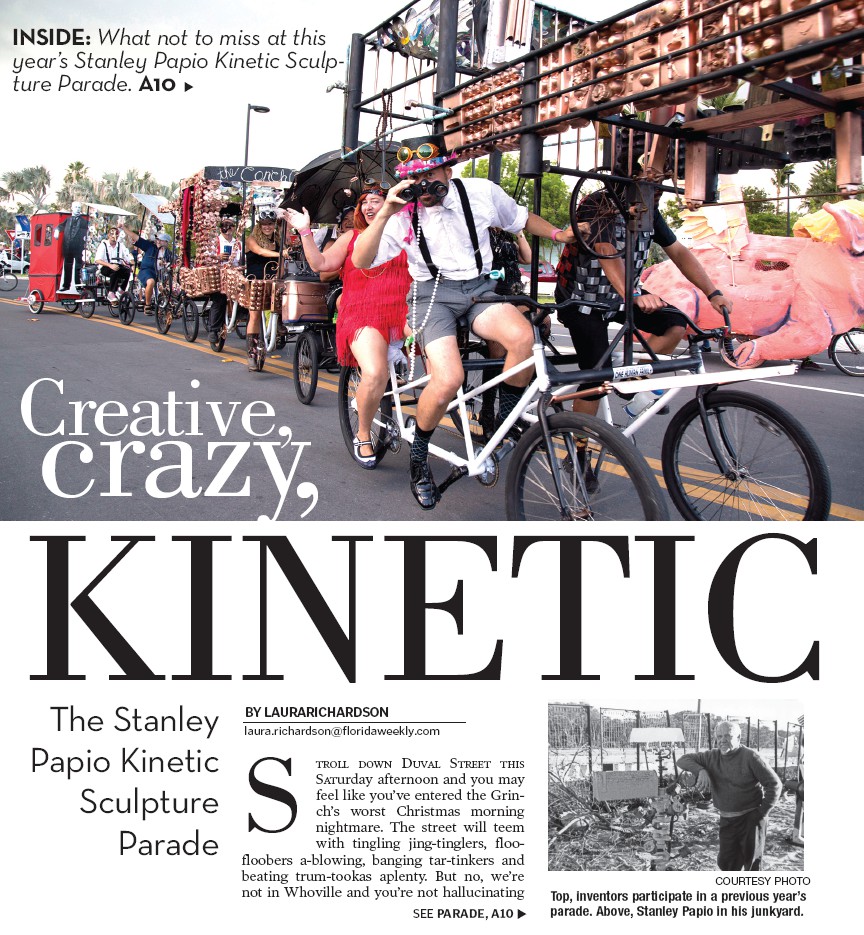 STROLL DOWN DUVAL STREET THIS SATurday afternoon and you may feel like you’ve entered the Grinch’s worst Christmas morning nightmare. The street will teem with tingling jing-tinglers, floofloobers a-blowing, banging tar-tinkers and beating trum-tookas aplenty. But no, we’re not in Whoville and you’re not hallucinating — this crazy collection of colorful creations is the Papio Kinetic Sculpture Parade, a moving display of kinetic artwork so whimsical and creative it could only have been thought up by a modern-day Dr. Seuss by the name of Stanley Papio (more on that later).

Look closely at the floats’ construction and you’ll see dozens of pieces of trash and parts repurposed from abandoned bicycles and other manner of machinery. Today, the old adage is truer than true — one man’s trash really is another man’s treasure and these treasures are truly a sight to behold.

After a smashing debut in 2016 and an even more enthusiastic turnout for the last two years’ parades, the Papio Kinetic Sculpture Parade has returned to inspire artists across the island to follow in the footsteps of the rebel sculptor, whose refusal to conform to society’s ideas regarding art and social norms, paired with a legacy of interactive, whimsical sculptures, inspired the Key West Art & Historical Society and Wonderdog Studios to mount a kinetic parade in the artist’s honor. 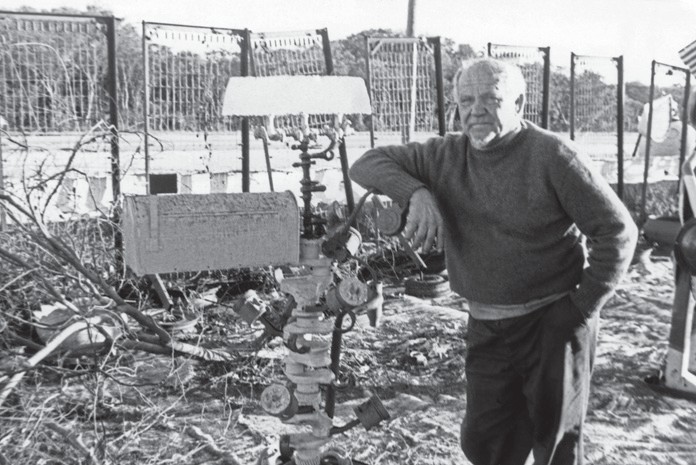 Top, inventors participate in a previous year’s parade. Above, Stanley Papio in his junkyard. COURTESY PHOTO

Conceived in coordination with the KWAHS’s taking over ownership of Papio’s sculpture collection, the bulk of which is now installed at historic Fort East Martello, 2016’s Papio Kinetic Sculpture Parade kicked off with a bang — or, rather, with a series of creaking gears, cogs and cheers — when over thirty human-powered sculptures made their way down Duval St.

Last year’s parade saw at least two dozen works of art rolling from the Custom House to the Southernmost on the Beach. Many participants incorporated Key West’s favorite mode of transportation, utilizing bicycles to power a series of fantastical floats, including a life-size representation of Shel Silverstein’s Giving Tree (wheeled by an impersonation of the bearded longtime Key West resident), a massive, man-powered pelican on wheels, a Day of the Dead-themed two-man machine and a wigged, winged, porcine representation of a certain tawny Commander-in-Chief. 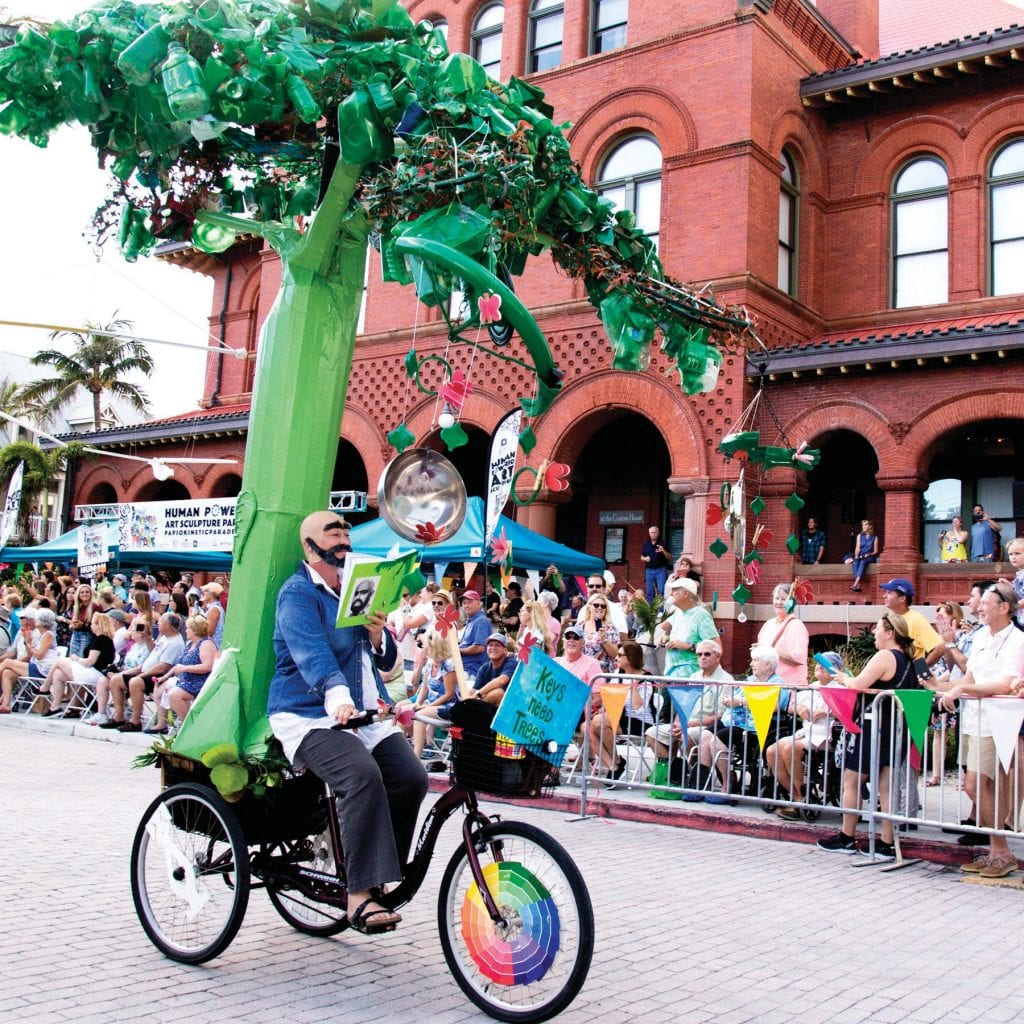 After three years of explosive kinetic creativity, expectations for this year’s parade are running high, with local artists calling out across social media channels for help collecting recycled materials to pay homage to Papio’s thrifty style. And as Key West’s various masquerades and festivals have continued to skew toward the adult end of things, the Papio parade stands out as one of the few truly family-friendly events in Key West that encourages artistic creativity and collaborative engineering — a far cry from the perfunctory bouncy house and face painting setup at most events in town.

“As the parade enters its fourth year, we are excited to see this event grow both in support and participation,” says Key West Art & Historical Society Executive Director Michael Gieda. “We are thrilled to rank among kinetic events around the country providing engaging, community-focused offerings that merge art, science, history and fun.” 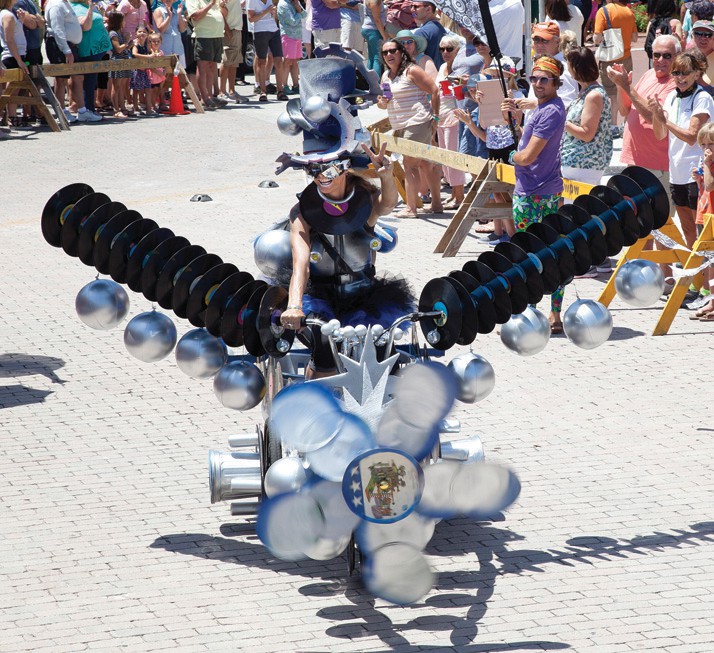 In the years since his death in 1982, Papio is remembered for being as prolific an artist as he was divisive a neighbor. After completing his service as a welder during World War II, Papio returned to the United States and chose to settle down in Key Largo. He purchased a small plot of land, where he promptly opened up his own welding shop and began to build a name for himself as an in-demand tradesman. Never one to see good material go to waste, he encouraged people passing by his property to drop off their junk metal — old cars, broken dishwashers, rain gutters, bits of wire — anything that he could take apart and re-weld.

For many years, Papio remained blissfully alone with his mountains of scrap, until encroaching developments brought neighbors close enough to take notice of his unusual yard decor. His new neighbors were less than enthusiastic; they viewed Papio’s property as blight on the increasingly upscale landscape, and they demanded he remove the junk from his yard. When he refused to comply, they had him repeatedly arrested for code violations. 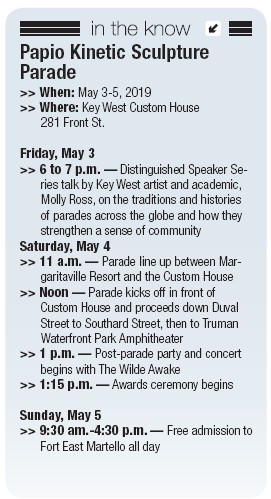 Papio, who in his youth had enjoyed amateur careers in boxing and wrestling, was not one to bow down in the face of a fight. He ignored the increasingly adamant demands of his neighbors and local code enforcement officers and, instead, began to repurpose the various mounds of scrap into fantastical works of art. Old cars and twisted lumps of rebar were reborn as enormous satirical sculptures.

A self-taught artist, his whimsical designs quickly improved and over time became politicized, as he was relentlessly harassed to discontinue his work. Anthropomorphized car hoods and refrigerator bodies with titles such as “Local Hassles No. 1” and “Greedy Grit the Contractor” were placed prominently at his property’s roadside, drawing the eyes of both his detractors and new fans.

In time, like so many great rebel artists before him, the increasing levels of ire that Papio’s work provoked were responsible for a growing community of artistic supporters who appreciated the works Papio continued to display in his newly-rechristened “Stanley’s Art Museum.” A 25-cent admission fee gave visitors entry to what had become a bona fide roadside attraction, with local travel tours adding his museum to their itineraries not long after.

Museums and private collectors came calling, and Papio began to exhibit his work outside the junkyard, including a European tour in 1981 as part of the U.S. State Department’s exhibition, “America Now.” Papio’s name was recorded in encyclopedias of native and folk art, and offers to buy his sculptures climbed into the thousands. At the height of his career, Papio began plans for a nationwide tour — until, at the age of 67, a sudden heart attack cut his blooming career short.

After his untimely death, Papio’s family decided to donate his work to the Key West Art & Historical Society, which has now installed more than 100 pieces at the East Martello Museum here in Key West. It is in memory of this iconic Keys artist’s wacky and wonderful career that the inaugural Papio Kinetic Sculpture Parade was created. A lover and defender of art that seeks to amuse, inspire and stand up to those who might deem it otherwise lowbrow, Papio’s legacy will live on in the inevitably eccentric entries to this year’s parade.

Kinetic sculptures are, for those unfamiliar with the art form, human-powered art that move. Forget the pickup-truck-pulled floats of Fantasy Fest; a kinetic sculpture is built around bikes, wheeled platforms, hand-pedaled cruisers or any other kind of people-powered base. These ingenious creations mix wheels with whimsy, and with kinetic parades being staged year-round across the globe, it’s clear that they’re a guaranteed good time.

Parade themes and rules vary from place to place; some even specify that the sculptures be amphibious, or attempt (and rarely succeed, to great amusement) to become airborne. Unicycles, bicycles, tricycles, quadricycles, skate boards, little red wagons — the list of possible sculpture bases goes on and on, making it easy for people to cobble together a sculpture without spending a fortune. (For those feeling especially ambitious, the East Coast Kinetic Sculpture Race Championships are held each year in central Maryland, where participants’ kinetic sculptures must traverse 14 miles of pavement, sand, mud and the waters of Chesapeake Bay.)

Thankfully, the Key West kinetic parade’s 1.5-mile road trek is far less strenuous, and the requirements for participating floats mercifully loose: there are no thematic mandates, no minimum speed one must be able to achieve while parading down Duval. The only prerequisite is that each float or art bike be human-powered, and be roughly no taller than eleven feet. There are no limits on the number of team members that may participate, and the establishment of separate categories for either art bicycles or kinetic sculptures is sure to produce a wide variety of work, including rumored double-decker and four-wheeled creations from a few local artists known to impress.

On Saturday, May 4, beginning at noon, sculptors both amateur and advanced will gather at the Key West Custom House to push, pedal or otherwise propel their art down Duval Street until they reach Southard Street, whereupon they will divert course and head for the newly constructed Truman Waterfront Park Amphitheater for the official post-parade party and concert.

Admission is free for parade participants, KWAHS members and kids aged 18 and under. General admission tickets run $5. More information about the after party can be found and tickets can be purchased online at www.papiokineticparade.com.

The Papio Kinetic Sculpture and Art Bike Parade is supported in part by the National Endowment for the Arts. Additional support is provided by the Monroe County Tourist Development Council, the Helmerich Trust, Margaritaville Key West Resort & Marina, Key TV, Keys Weekly, Law Offices of Samuel J. Kaufman and First State Bank of the Florida Keys. Your Museums. Your Community. It takes an Island. ¦