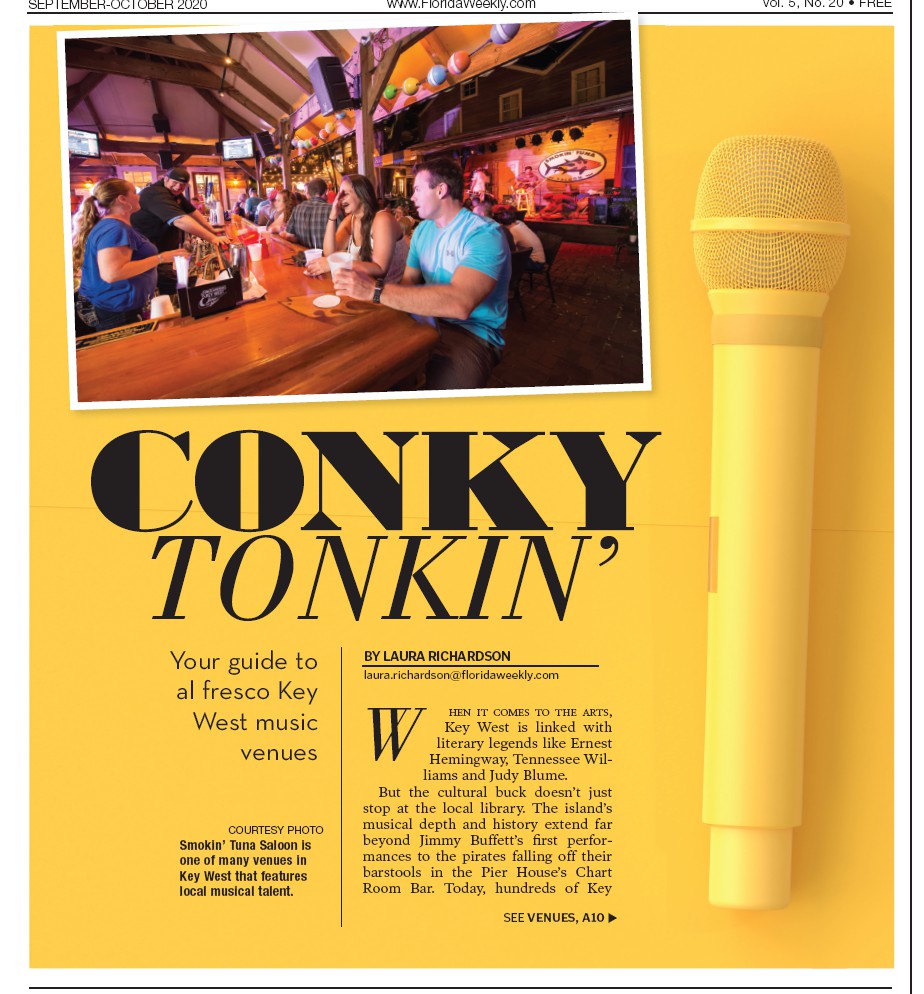 Smokin’ Tuna Saloon is one of many venues in Key West that features local musical talent. COURTESY PHOTO

WHEN IT COMES TO THE ARTS, Key West is linked with literary legends like Ernest

But the cultural buck doesn’t just stop at the local library. The island’s musical depth and history extend far beyond Jimmy Buffett’s first performances to the pirates falling off their barstools in the Pier House’s Chart Room Bar. Today, hundreds of Key

West residents make their living in the entertainment industry, and the island’s live music scene is as diverse and vibrant as what you’d find in any major U.S. city. Because there are so many talented musicians to choose from (and because the national appetite for live music is so insatiable), nearly every bar or restaurant in Key West doubles as a music venue. But on an island where it’s sunny a whopping 260 days out of the year, it seems almost sacrilegious not to enjoy the stunning weather while you listen to top tier musical talents. Whether it’s a secluded restaurant courtyard or our state-of-the-art seaside amphitheater, Key West has almost too many options when it comes to music venues that take advantage of our year-round sun exposure. Here are our favorite places to catch a tan (or a gorgeous Key West sunset) while also catching some tunes. 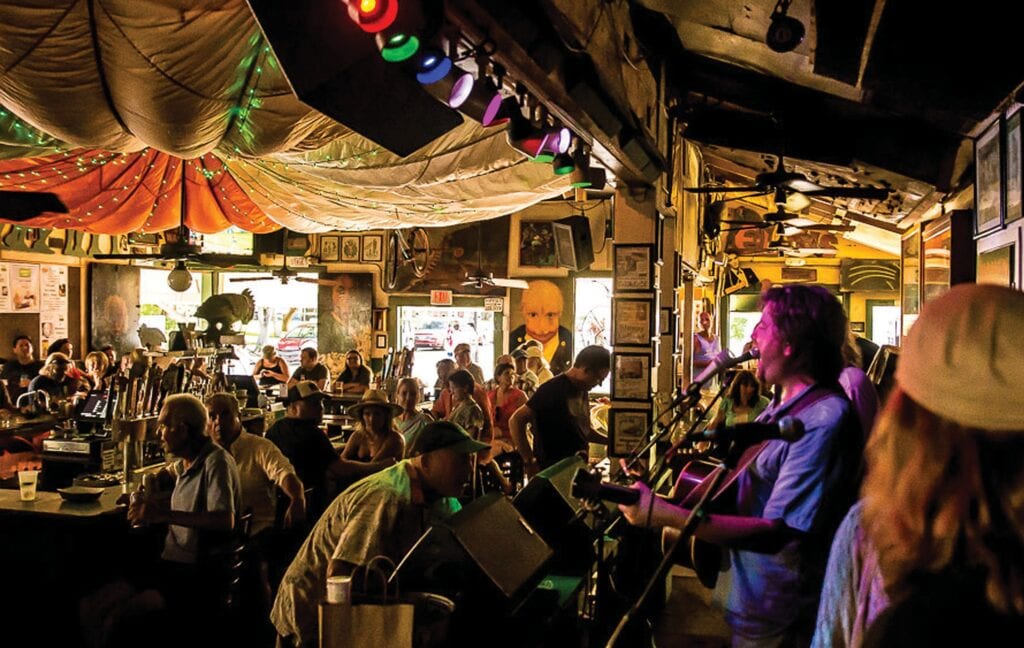 While it technically isn’t an outdoor venue, Green Parrot has open doors and windows to bring the outside in. It’s the quintessential Key West saloon. COURTESY PHOTO

Honoring its owners’ shared South American heritage, Viva has established itself as the first and only Argentinean steakhouse in Key West. The menu may be a carnivore’s delight, but it’s Viva’s rustic courtyard, strung with twinkle lights and always humming with bright energy, that’s the real draw. Though the restaurant abuts Duval Street, the courtyard’s depth (it used to house a large swimming pool back in its younger days) is surprisingly insulating, making it a great place to catch both established and up-and-coming local acts without distraction from passersby. 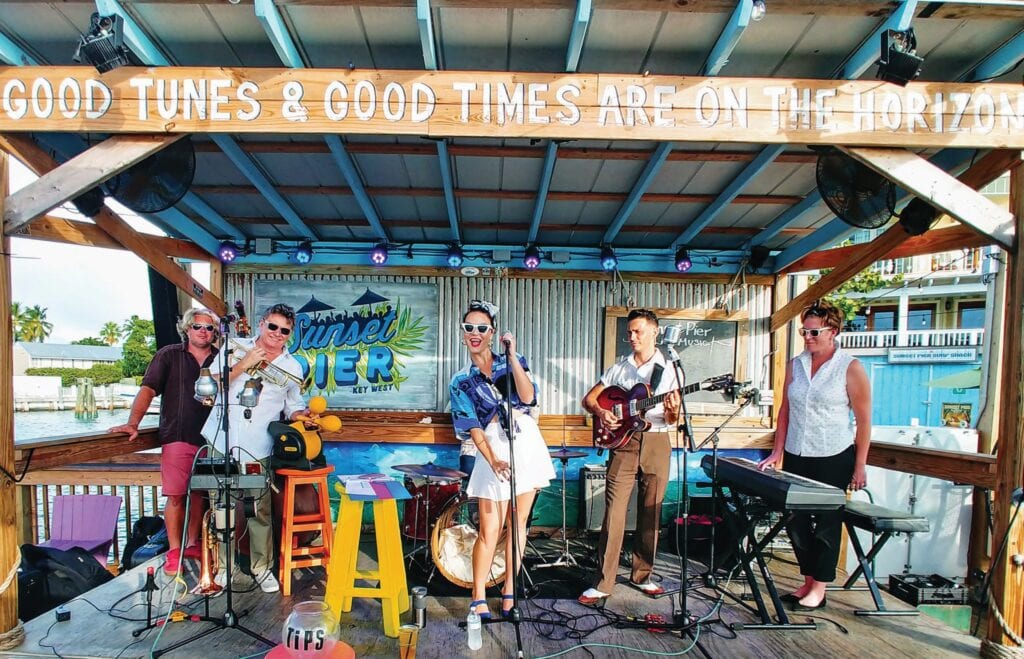 A relative newcomer to the outdoor music scene, Hank’s Hair of the Dog Saloon is as relaxed and informal as it gets in an already relaxed and informal town. Grab a frosé from the bar, order tacos or a burrito from Garbo’s, the onsite food truck, and grab a front-row seat to whichever local star Hank’s has booked for the evening — Tony Baltimore, Shastina Chiles, Caffeine Carl and George Chapman, Rob Benton … it’s truly a who’s who of the Key West School of Music. Hank’s also gets extra Scooby snacks for being dog friendly, so your canine plus-one also can enjoy a little live music (or maybe just the leftovers from your Korean beef burrito). 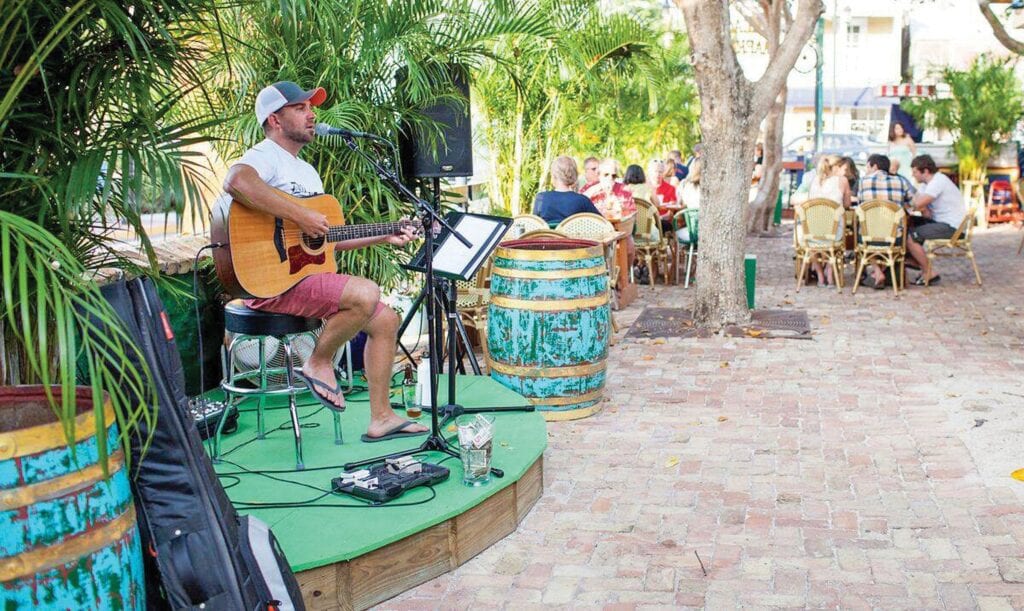 Key West is itself a tropical paradise, but there’s something about turning down Petronia Street into the Bahama Village neighborhood that makes it feel like you’re on an even more remote island in the Caribbean, with nothing on the day’s to-do list but to enjoy a cold beer and a good meal (or two) with mellow tunes playing in the background. If that’s the ambiance you’re after, Blue Heaven is an oasis in the midst of Old Town Key West (and the Blue Heaven of today is certainly a far cry from the days when the property used to host Friday night boxing matches refereed by Hemingway himself).

Blue Heaven specializes in alfresco dining, Key West style. It has an innovative menu served beneath canopies of tropical foliage with a variety of live entertainment that doesn’t distract from the food, but adds to the sensation that you’re far, far away from worries and responsibilities. It’s the kind of place that will make you believe, as Mr. Buffett sang in “Blue Heaven Rendezvous,” that “there’s still some magic left in this tourist town.” 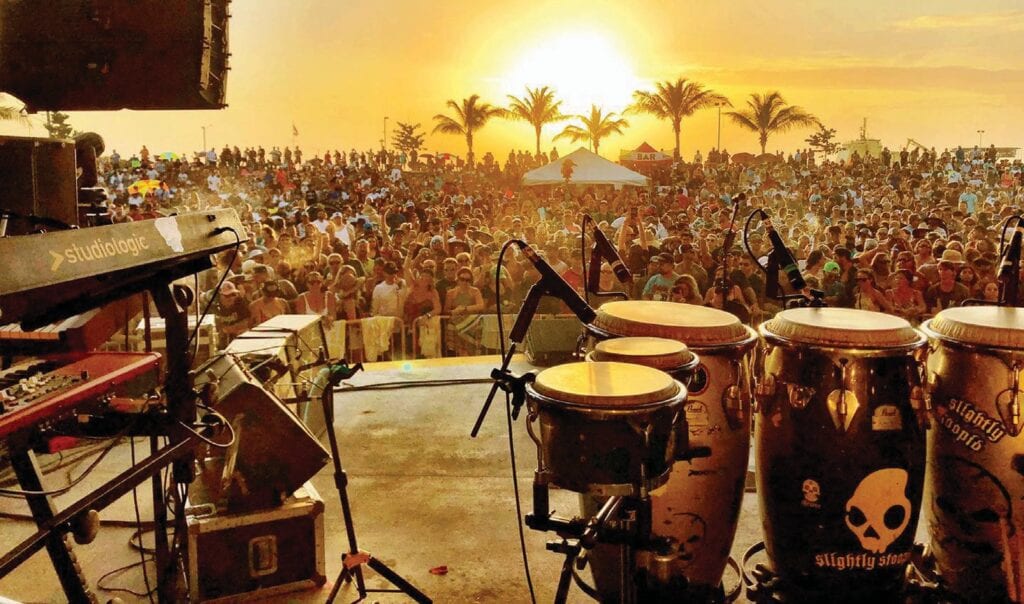 Like its Bahama Village neighbor Blue Heaven (see above), Rams Head Southernmost gives the impression that life is easy breezy here in the Florida Keys. Founded in Annapolis, Maryland, Rams Head is a family-owned and operated entertainment company, so while the food and drinks at Rams Head Southernmost are definitely delicious, the real focus is on the local musician on stage. Expect live music seven days a week during both lunch and dinner — and don’t be surprised if it’s a steelpan band. We are in Bahama Village, after all.

If the words quirky and unique describe some of your favorite hometown venues, then you’ll feel right at home at General Horseplay, where cocktails and tomfoolery go hand in hand. The bar’s interior is New Orleans burlesque meets Tim Burton wonderland, but the back bar courtyard area is where General Horseplay really shines. 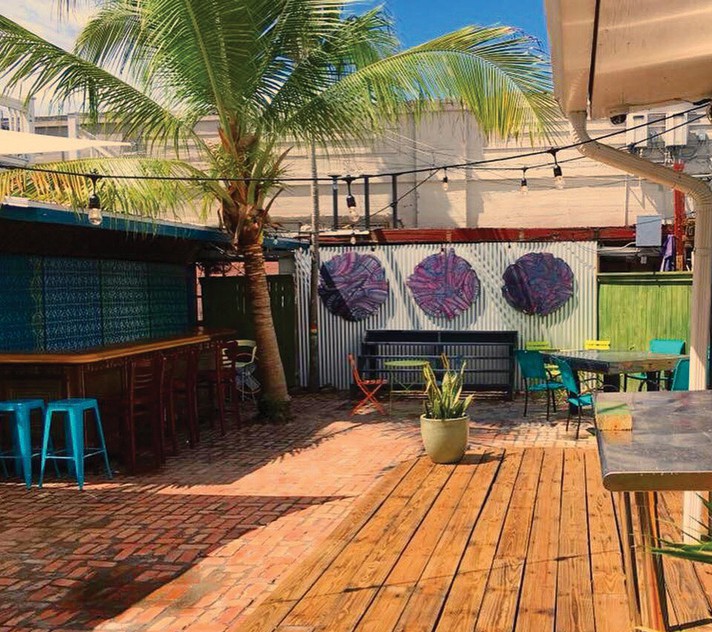 To put it bluntly, there’s almost always something weird going on over on the General Horseplay stage, and the musical options are often just as offbeat as the bar itself. Recent acts have included Guerilla Funk, a nostalgic ’90s rock outfit that covers everything from Weezer to Rage Against the Machine (BYOF — Bring Your Own Flannel), The Raw Dawggs, a local two-piece blues rock duo, and The Skallywagz, who specialize in a mixture of “Irish folk, pirate sea shanties and moonshine drinkin’ gospel.” If you have an open mind, you just may be pleasantly surprised. (The exotic cocktail menu doesn’t hurt, either.)

Tucked behind La Trattoria restaurant down Appelrouth Lane, Virgilio’s bills itself as Key West’s finest martini bar, and they’re not wrong — especially on Monday nights, when martinis are a dangerously affordable $5. But what really makes Virgilio’s stand out in a town of classic rock cover bands and spring break shot specials is its class. The Virgilio’s crowd skews a little older, a little more refined, a little less overindulgent when that sinful third martini beckons.

The nightly live entertainment tracks that upscale speakeasy vibe, too. Jazz, Latin and blues bands are typical fare at Virgilio’s, and the dimly lit dance floor is nearly always studded with bodies that can’t help but move to the music. Especially after a martini or two.

Sunsets in Key West are legendary, and rightfully so. Crowds pack Mallory Square nightly to take in the unconventional tones of Cat Man as he serenades his acrobatic felines while the sun performs a technicolor light show as it sinks into the Gulf of Mexico. But what if that serenade came with a cocktail and was instead performed by a three-piece band? Take a trip around the corner to Sunset Pier to find out.

Located on the waterfront adjacent to Mallory Square and outside Ocean Key Resort, Sunset Pier is one of Key West’s only outdoor music venues that sits right on the water. Live musicians perform nightly and the variety can’t be beat. Robert Albury, Key West’s original Soul Man, is a Sunday night staple, and Rolando Rojas’s Spanish-inflected classical guitar makes any Monday feel like a Friday. Add a dazzling sunset and it’s hard to imagine a more perfect setting.

In addition to serving up some of the tastiest local seafood in Key West, Smokin’ Tuna Saloon features just about the best lineup of local musical talent on a daily basis. The Tuna’s most beloved resident musician is arguably Caffeine Carl Wagoner, who typically performs with his band The Buzz four nights a week, but on any given night patrons can get their faces melted off by insane guitar licks and world-class talent, all just a block off Duval Street.

Smokin’ Tuna also is home base for the Key West Songwriters Festival, which brings hundreds of songwriters — including Brad Paisley, Florida Georgia Line and Maren Morris — to the island every spring, so the Tuna’s musical connections run both deep and wide. And the open courtyard strung with soft café lights doesn’t hurt the ambiance one bit, even when Caffeine Carl starts to shred. 2. Coffee Butler Amphitheater (21 E. Quay Road, 305-985-0433, www.the keywestamp.com)

Before the Coffee Butler Amphitheater was built, the prospect of having a professional amphitheater that could attract national touring acts was little more than a far-off dream for the thousands of music fans who live in the Florida Keys. And in the three years since the amphitheater opened its gates, many of those musical dreams have come true. Since 2017, the venue has hosted huge names in the music business, from Styx to The Revivalists to Willie Nelson, with a smattering of local and national festivals thrown in the mix.

Starting Saturday, Oct. 3, the Coffee Butler Amphitheater will host Sunset Series at the Amp, featuring local musicians like Kristen McNamara and Coffee Butler himself, every Saturday night from 5-9 p.m. Bring a blanket and watch the sunset at a socially safe distance from your neighbors in the most beautiful (and acoustically pleasing) venue in Key West.

OK, so the Green Parrot isn’t technically an outdoor venue, but with the doors and windows open and the sun shining in, it sure as heck feels like one during the daytime hours. And when it comes to Key West’s live music legacy, the Parrot’s history is second to none. In the late 1800s, the building where the Parrot now sits was a grocery store where local musicians of Cuban and Bahamian descent hosted impromptu late-night jam sessions. After World War II, the grocery became the Brown Derby Bar, a popular hangout for the Navy servicemen stationed in paradise, and in the 1970s, the Green Parrot was born.

In the intervening half-century since the Green Parrot opened its doors, it’s been lauded as the quintessential Key West saloon (with kickass music nearly every night of the week) by everyone from Playboy to Vogue, and The Guardian named the bar one of the top 10 music venues in all of Florida. And over the years, members of the Grateful Dead, Rolling Stones and Blues Brothers have made their Green Parrot debut. Today, the characters that grace the Parrot’s hallowed stage range from local ukulele enthusiasts and Key West’s own Beatles tribute band to legitimately famous performers like Entrain (the drum-driven World Pop sensation) and TR3 (whose frontman, Tim Reynolds, is the Grammy-nominated lead guitarist for the Dave Matthews Band). Few acts are more iconic than downing a root beer barrel and a handful of freshly popped popcorn during Sound Check at the Green Parrot — that’s one for the Key West bucket list.

Much like the Coffee Butler Amphitheater, the Sunset Green Event Lawn at The Keys Collection (3820 N. Roosevelt Blvd, 305-600-1425, www.thekeyscollection.com) draws big-name performers (The Beach Boys, Grace Potter, Michael McDonald) in a festival-style venue, where you can spread out and enjoy a nighttime performance under the stars.

What Willie T’s (525 Duval St., 305-294-7674, www.williets.com) lacks in coziness, it more than makes up for in proximity to Duval Street — and the people watching that goes along with it. The other upside to its location on the main drag is that it’s in the middle of all the action and the musicians on the world-famous Willie T’s stage are so close to the street that it’s impossible to just pass on by without stopping to make a request or two (and have a freshly made mojito).

Hog’s Breath Saloon (400 Front St., 305-296-4222, www.hogsbreath.com) may be best known for its famous slogan, “Hog’s breath is better than no breath at all,” but its roster of talented local and national acts is what really keeps people coming back year after year (or night after night — we’re not judging).

The Schooner Wharf Bar (202 William St., 305-292-9520, www.schoonerwharf.com) is the perfect spot for laidback outdoor listening. Sip a frozen rum runner (floater optional), nosh on an order of crispy conch fritters and listen to some of Key West’s more old school talent while you watch the tall ships sail in and out of the harbor at the “last little piece of Old Key West.” ¦