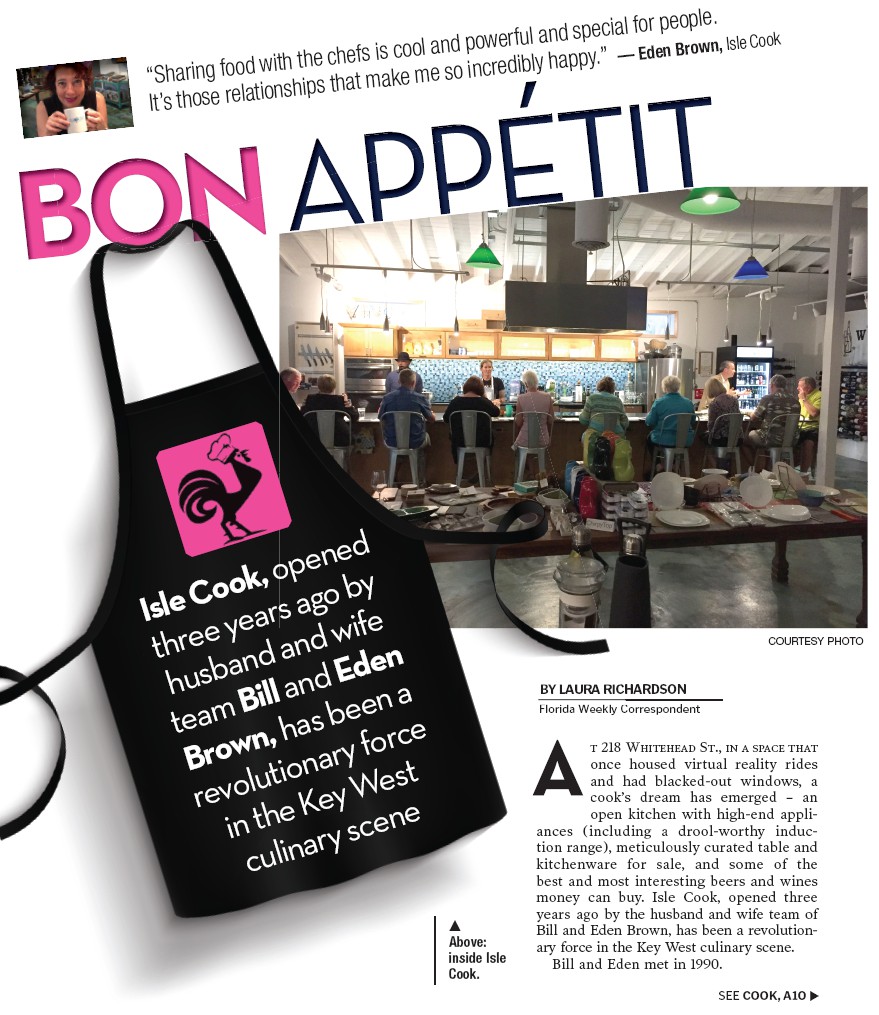 AT 218 WHITEHEAD ST., IN A SPACE THAT once housed virtual reality rides and had blacked-out windows, a cook’s dream has emerged – an open kitchen with high-end appliances (including a drool-worthy induction range), meticulously curated table and kitchenware for sale, and some of the best and most interesting beers and wines money can buy. Isle Cook, opened three years ago by the husband and wife team of Bill and Eden Brown, has been a revolutionary force in the Key West culinary scene.

“We were both interviewing for graduate school in clinical psychology at a school that neither of us attended,” Eden laughs. “We saw each other again a week later interviewing at Florida Tech, which we each chose to attend not knowing the other had chosen the same. So, we started graduate school together and were best friends until we started dating 27 years ago.” 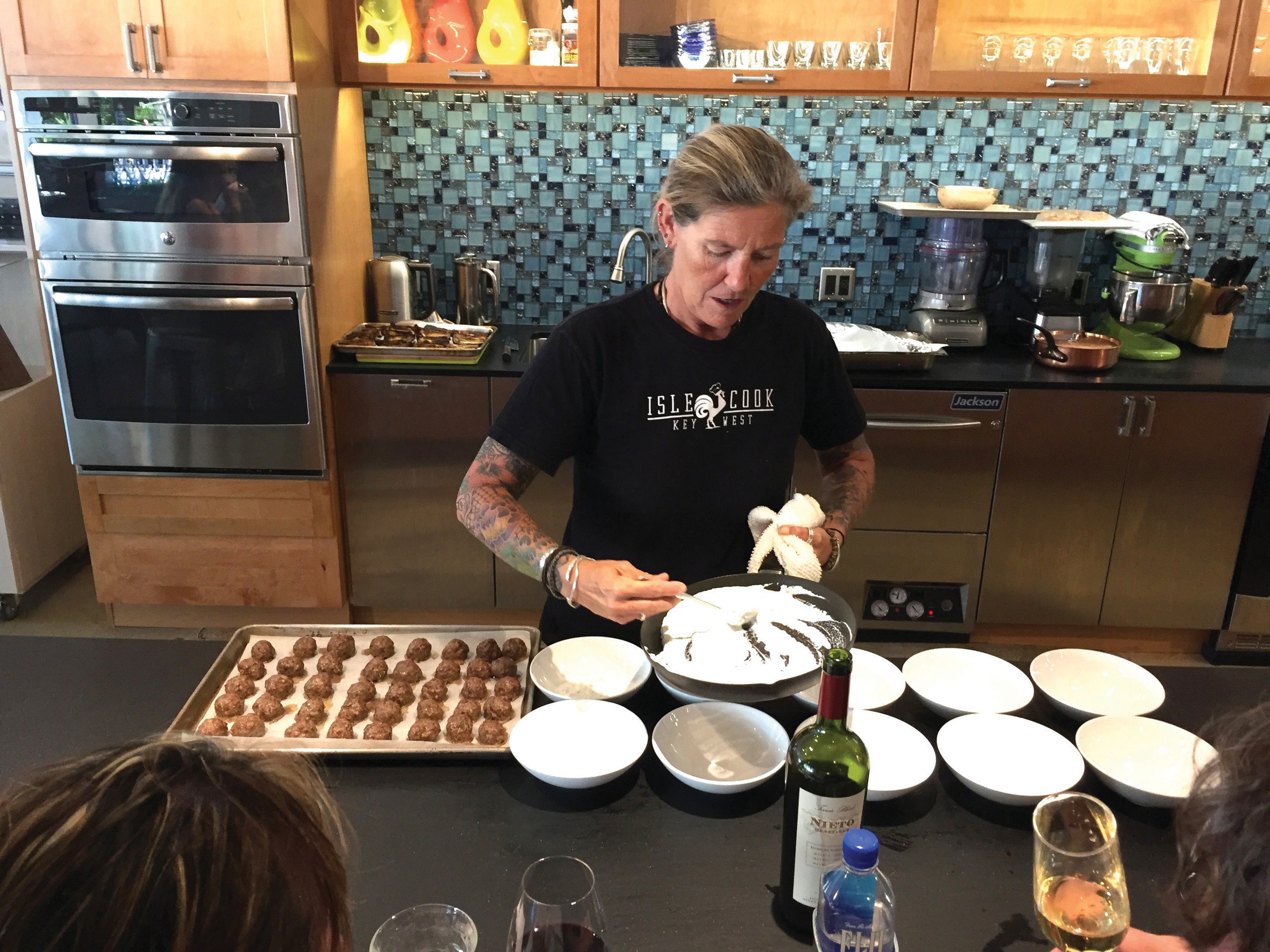 Martha Hubbard is resident chef at Isle Cook and teaches her skills to customers during special classes. COURTESY PHOTOS

Uniquely, Bill and Eden are both licensed clinical psychologists with master’s degrees and doctorates in clinical psychology. They married in 1993 and moved to the D.C. area, where Eden is from. Eden worked for the VA Hospital in D.C. for five years, specializing in combat trauma. Bill worked in public mental health. They opened up a private practice together, which they ran for 10 years until Bill went to work for Argosy University in an administrative capacity and Eden decided to detour to film school. 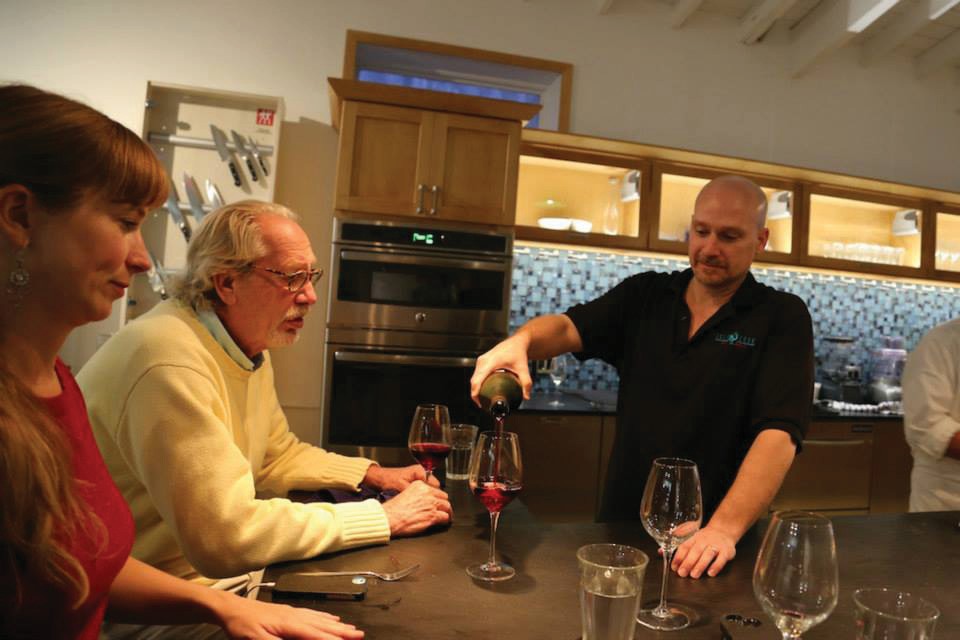 “I thought I wanted to make documentary films, so I cut my practice back,” Eden recounts. “When I got to film school, I realized I didn’t want to make documentaries anymore but I fell head over heels in love with writing – fiction, screenplays, novels, short stories, children’s stories… all of it.” 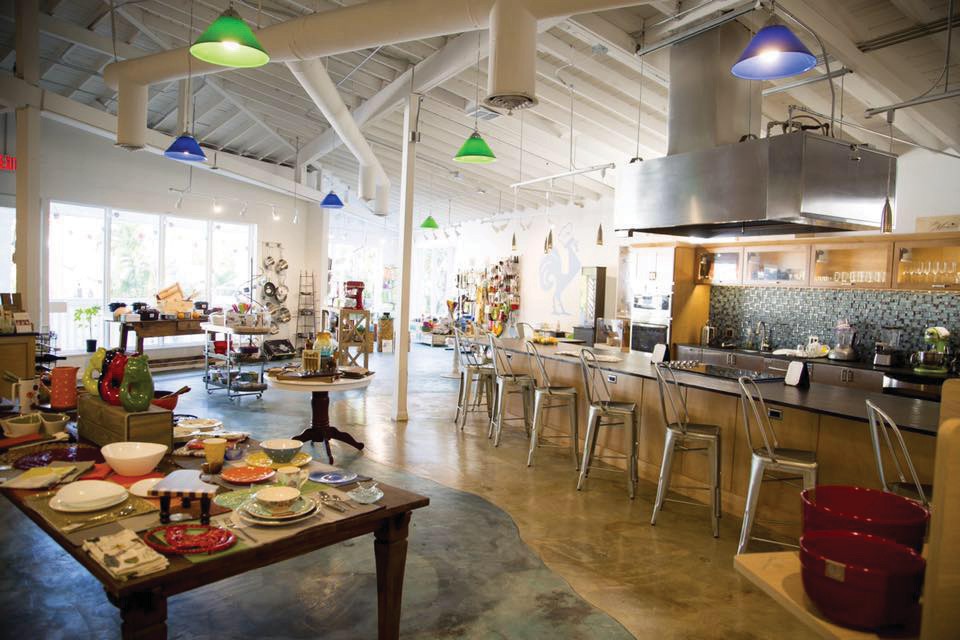 Isle Cook offers both cooking experiences and the ability to purchase cookware.

“This is where it gets really weird,” Bill cautions. “From the time that we met, we came to Key West virtually every year at least once a year and the amount of time we spent here got longer and longer. The last time we ‘visited’ almost five years ago was initially for two months. During that two-month period, we bought a place, moved down here and never left. My job allowed me to travel often and work from anywhere, but three years ago I got laid off from Argosy University and it was the best thing that ever happened. Eden had a small private practice here, but Key West was a little too small for her to enjoy practicing here. We knew that we wanted to stay here, we wanted to be our own bosses again and we wanted to be more integrated in the community.” 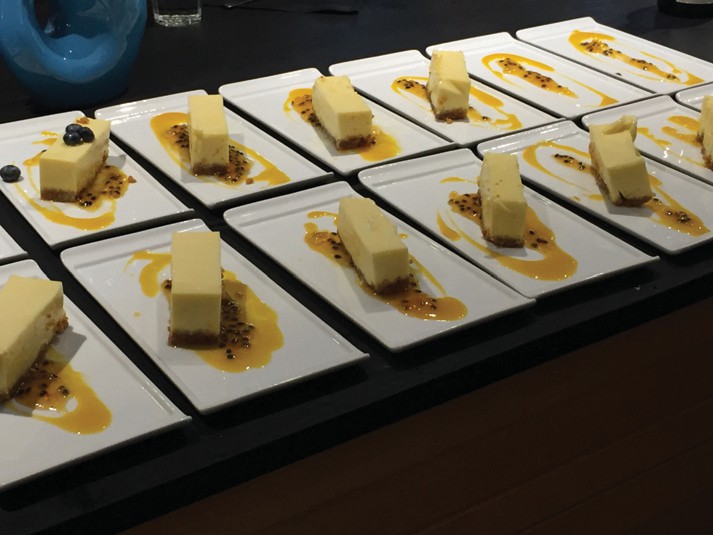 “Food and drink and really lovely food and drink had been part of our relationship from the very beginning,” Eden adds. “It’s something we’ve enjoyed and it’s always been a priority for us. Put us in any given city, in any given place, and that’s what we’ll do – find the best restaurants, ask locals for recommendations, and eat and drink to our hearts’ content. A few years ago, we were on the mainland and in a shop kind of like Isle Cook, but not exactly. We both looked at one another and said, ‘Are you thinking what I’m thinking?’” 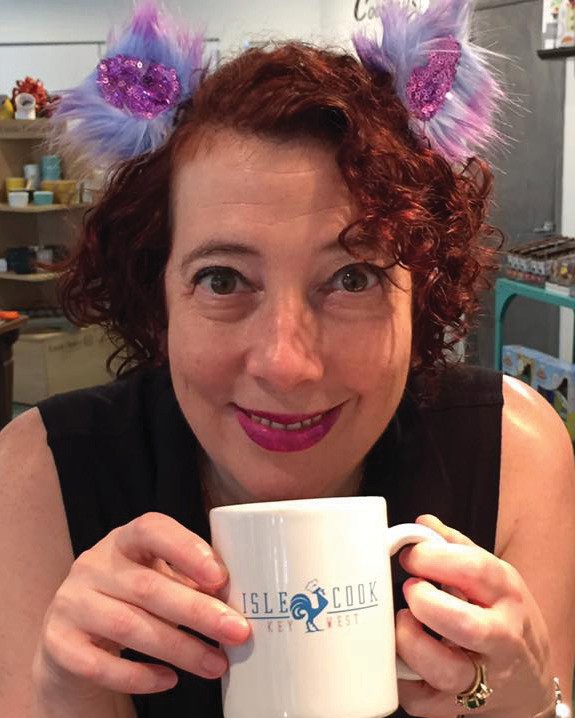 “So, we came back to Key West, drew up a business plan, and started looking for a space,” Bill explains. “We knew we wanted to build a kitchen theater and focus on hands-on cooking lessons and chefs’ tasting menus. We wanted to get chefs out of the kitchen and in front of people so they can share what they do and watch people enjoy their food and answer questions and get immediate feedback. And in looking at similar businesses, the one thing we wanted to do differently was to bring chefs from the community in. We wanted it to be a place where local chefs could come in and play and try out new things and share with the community.”

And that they have. Since the doors opened in 2014, chefs from across Key West have utilized Isle Cook as a playground for innovating their cuisine and actually interacting with the people they serve nightly in their restaurants. 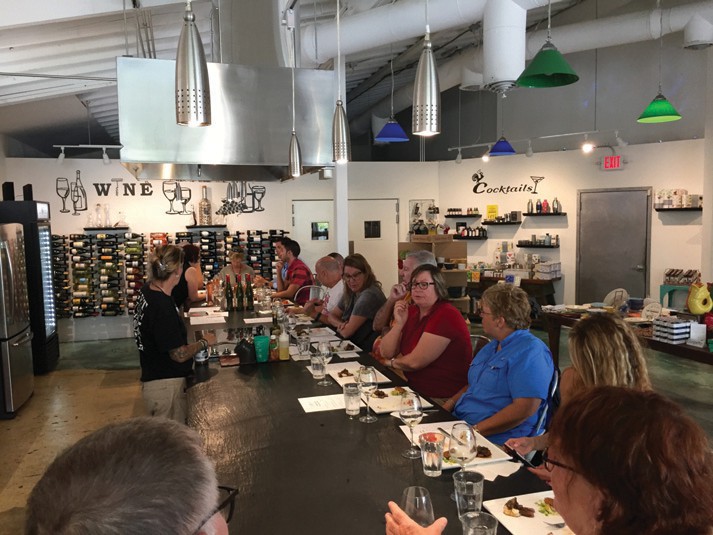 Isle Cook is designed for conversation.

“We were thrilled to discover that chefs and owners of restaurants in the community actually supported the idea,” Bill says. “We’re not seen as competition. It’s collaborative. To us, more is more. If people like a certain chef, they’ll spread the word. Key West has been a very, very welcoming place for this concept.”

However, Isle Cook isn’t all tasting menus and chefs’ tables. They also host hands-on cooking lessons and do a lot of wine education. “We love bringing in winemakers, master sommeliers, and winery reps,” Bill says. “Every week, we do a wine and food tasting focused on how food and wine go together. It’s a chance to try things that people have never tried and not have it be in any way snotty or intimidating.”

It would be impossible to talk about Isle Cook’s success without talking about the gastronomic genius behind the culinary side of the business – chef Martha Hubbard. From the time they opened in February 2014, Bill and Eden hounded Martha, a locally renowned chef with major culinary chops, to come cook for them. She finally acquiesced and did her first guest chef stint in June of that year.

“From the very first dinner, Martha was the most natural and comfortable of the chefs we had had to that point,” Eden says. “She was behind the stove cooking, talking and sharing her love for food, and it was amazing. After that dinner, Martha approached us and laid out her ideas for growing the business, many of which were things we had talked about but she had no way of knowing about. Her vision and ours were totally aligned. And so, in November 2014, Martha joined us full-time as our ‘culinary curator.’ She is such a great teacher; she is so incredibly patient and good at meeting her students where they are, whether it’s someone really advanced or a total beginner.”

Since she started at Isle Cook, Martha has implemented a program of hands-on cooking lessons covering everything from basic knife skills to entire Thanksgiving dinners. This year, for example, Martha’s island-themed Thanksgiving lessons will span the first three Thursdays in November and will focus on Caribbean and Keys influences.

“It’s not traditional by any stretch of the imagination,” Martha says, “but it’s familiar!” Martha has also had a huge hand in creating the Conch Revival Picnic, with support from the Key West Art and Historical Society, which will be happening for the third year in January.

“The idea behind the Conch Revival Picnic is that culture is food and local cuisine has been slowly disappearing and you can’t really find it in any of the restaurants here,” Bill explains. “So, we initially brought local chefs together to recreate some of these old dishes and it expanded from there to being not just about food but about other local culture. Every year, the number of attendees and the scope of the event grow beyond our greatest expectations.”

Ultimately, opening Isle Cook has been a fantastic way to bridge the gap between the chefs in town and their customers in a setting more intimate than the average restaurant.

“Our guests are so lovely and wonderful and interested and their questions are amazing and thoughtful,” Eden gushes. “Our guest chefs are always surprised that the diners are actually interested in what they have to say. There’s not a bad seat here and we like it that way. We want them to be small intimate events.

“Sharing food with the chefs is cool and powerful and special for people. It’s those relationships that make me so incredibly happy,” Eden continues. “I love the friendships and relationships that are made at Isle Cook. I love that people can come here alone for an event and will not ever really be alone. In Key West, you don’t get the stratification that exists in other cities. I love that it’s people’s interests and passions that bring them together and not what you do or how much money you make because all of those things are just irrelevant.”

What is relevant is how Isle Cook is completely altering the nature of the dialog between Key West’s cooks and its culinary enthusiasts (which is just a fancy term for “eaters) and is focused on making that dialog fun and exciting by hosting unique events and classes. For example, for Fantasy Fest this year Isle Cook has prime parade-viewing real estate and will host a dinner based on the 1983 Chicago’s World Fair featuring foods invented during that time. Distinctive, thought-provoking, and delicious – Isle Cook in a nutshell.

For a full list of Isle Cook’s events and to learn more about its culinary philosophy, visit its website at www.islecookkeywest.com. And if you’re in the market for cookware that you can pretty much guarantee no one else has (or just a glass of wine and fascinating conversation), check out their offerings at 218 White St.

One response to “BON APPETIT”