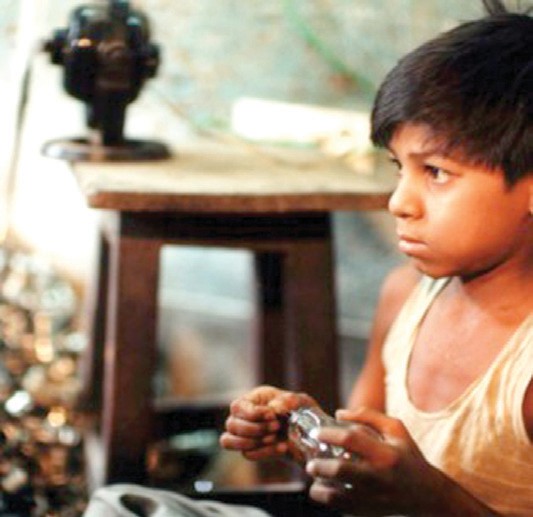 Images of child laborers by Robin Romano will be on display at The Studios of Key West. COURTESY PHOTO

What makes someone an activist? Does activism necessitate action or can we consider ourselves activists if we genuinely desire to confront our discomfort in order to understand the plights of those who are less fortunate? These are the questions Erika Biddle is hoping to address in her newest exhibit, “Blind Spots — Modern Slavery Exposed.”

On Thursday, Feb. 7, The Studios of Key West will host a special opening reception for “Blind Spots” in the XOJ Gallery from 6 p.m. to 8 p.m. “Blind Spots” is a sobering look at modern-day slavery and the three-part traveling exhibit is part of a multi-faceted project developed by Key West resident and activist Erika Biddle to encourage action against human trafficking and child exploitation.

“In recent years, reports that Monroe County children have been victims of sex trafficking targeted by groups from the mainland have shocked the community,” says Biddle. “It’s a problem that has remained largely out of the public eye, at least in the world’s richest nations. When I was first organizing this exhibit, people in Key West were incredulous — they truly believed that human trafficking wasn’t happening here, but the reality is that it is, especially in the migrant community. But thanks to the internet and our increasingly interconnected world, the issue of modern-day slavery, including child exploitation, is finally becoming an issue for public debate in places like Key West.” 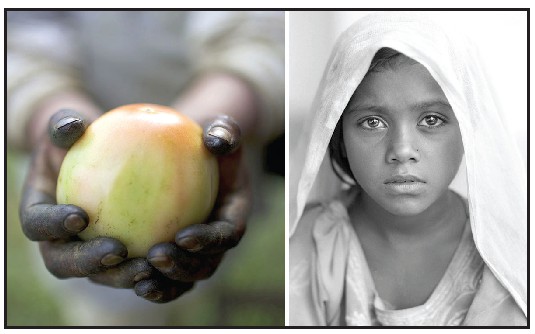 “This strikes home as much as any other violent act that we see in the world today,” says Keys to Be the Change Founder and exhibit sponsor Heidi Golightly. “’Blind Spots’ offers not only awareness but inspiration for concrete actions that people of all ages can take to combat this worldwide epidemic. As the mission of Keys to Be The Change is to empower young people to realize their full potential while taking action to create positive change in the world, we are eager to support this project in hopes that our community will band together to put an end to human trafficking once and for all.” 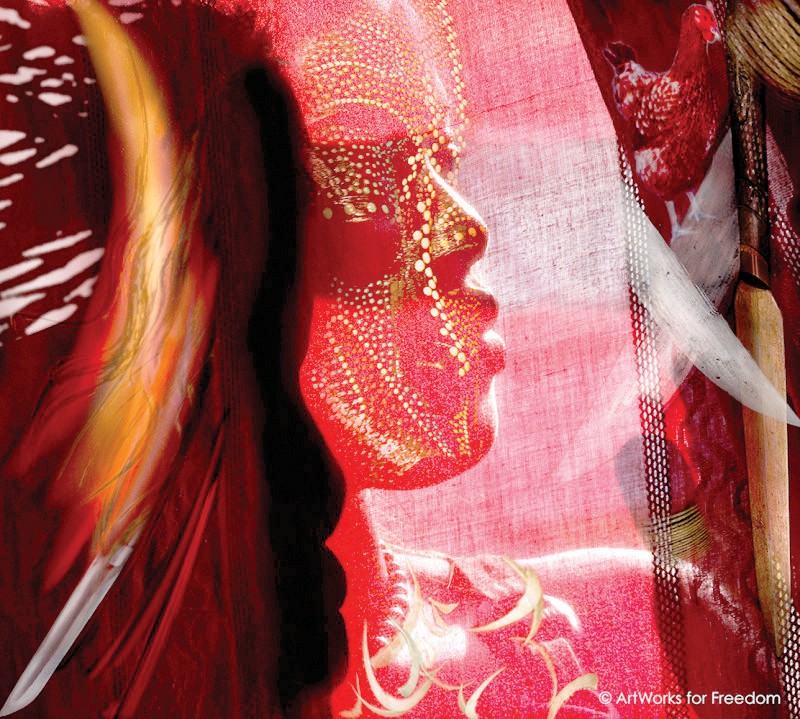 The exhibit includes images and text by renowned photographer U. Roberto (Robin) Romano portraying child laborers from across the globe (who, it is important to note, have since been freed and rehabilitated) co-curated by Jodell Roberts, art installations by local artists Cricket Desmarais and Gretchen Mills, ceramics by the Florida Keys Community College Mudpie Club, the work of several participating local students and artwork from local teen trafficking victims.

To Erika, it was imperative to interweave art and exposé because, in her eyes, art softens the blow of the disquieting nature of the subject matter. “The concept of human trafficking is a very difficult topic, especially when you deal with children, so we developed this concept of ‘art-reach’ to explain it to people without frightening them,” she explains. “’Art-reach’ is when you use art to help the public become aware of a distressing issue without being frightened and uncomfortable. ‘Artreach’ is going inside a person to engage their sensibilities instead of relying on purely external information to inform and educate.”

Top: “First the Dream, then the Nightmare” and “The Game, the Track, the Life,” two images from Kay Chernush’s “Bought & Sold: Voices of Human Trafficking.” COURTESY PHOTOS

The portion of the exhibit installed at the Studios focuses primarily on the child labor aspect of human trafficking. “By exhibiting images of child laborers, you actually see these kids as fellow humans,” Erika says. “It appeals to your humanity to be eye to eye with these children. I would love it if people would look at these kids and think ‘What if that was my child or my grandchild?’ Empathy is the bridge from us to the other, which reminds me of this wonderful Anne Frank quote: ‘How wonderful it is that nobody need wait a single moment before starting to improve the world.’ At the Studios, we hope that people pause to reflect and are ultimately moved to act.”

On Saturday, Feb. 9, at 7 p.m., the Studios will also host a film screening of “Children of Bal Ashram,” a film that documents the work of Nobel Peace Prize recipient Kailash Satyarthi, who liberated and rehabilitated more than 87,000 children from child labor, slavery and trafficking. “In my opinion, this film is about the most positive outcome in situations like these — that you can take such a horrendous experience and still turn it around,” Erika reflects. “Satyarthi was able to give these children a childhood they never had and build them a family with others who had been through the same experience. And he is also training them to become activists so that they in turn can help others.” A Q & A with director Len Morris and a discussion about what actions can be taken to protect the innocent will follow.

Above: On Saturday, Feb. 9, at 7 p.m., The Studios of Key West will host a screening of the film “Children of Bal Ashram” followed by a Q&A with Len Morris, the film’s director.

In addition, the outdoor exhibit “Bought and Sold” by Kay Chernush will be presented by ArtWorks For Freedom at the African Cemetery on Higgs Beach, a location selected to honor individuals who were abducted to be sold as commercial goods so many years ago but were rescued by the U.S. Navy in 1860. “Bought and Sold” is a series of billboard-size abstract images, each accompanied by a brief account written by a human trafficking victim. “We chose to place this aspect of the exhibit outside because this issue is all around us — it shouldn’t be hidden on the third floor of the Studios for a certain audience; it should be out in the world,” Erika explains. “We also had four local organizations that work with at-risk youth — The Boys and Girls Club, Project Lighthouse, Keys to Be the Change and Take Stock in Children — paint salvaged doors that we are calling ‘Portals of Hope.’ Two doors will be at the Studios and two will be at the African Cemetery. We wanted them to paint their experiences with and reactions to human trafficking and the pieces are a powerful public and visual representation of our commitment to eradicate human trafficking and child exploitation.”

The realities of human trafficking are jarring and, frankly, “Blind Spots” is a stark departure from the light fare typically peddled by Key West’s cultural outfits. “As difficult as it is to grapple with these subjects, it is so important to remember that these injustices and transgressions were not something that merely happened in the past,” Erika urges. “Human trafficking and modern slavery still continue to this day. What I’m trying to do is encourage the public to engage with this tragedy by using art as a medium to communicate. When you use art as a language, it becomes apolitical. Artistic expression is something that is more practiced and embraced than activism is, so we hope that the art will draw people in, make them feel and ultimately make them want to act — how they choose to act is not important, as long as they act. And activism can also be an art form — that’s what Cricket is doing with her art installation. Cricket and her army of generous volunteers have folded hundreds of origami boats and on the bottom, each boat has a concrete action that someone can take to combat human trafficking. But before the installation was even up, all the people that were folding boats were automatically involved in the conversation.”

To Erika, activism is not some lofty endeavor reserved for the well-meaning with the means to mean well. Activism begins with the mere recognition that a problematic circumstance exists and must be rectified and that any individual can truly make a difference, no matter the size. “I realize that I can’t change policy, but I can get people to do a little something within my circle of influence and my community,” Erika says. “Think globally, act locally.”

“Blind Spots” is free and open to the public throughout the month of February. The exhibit is sponsored by Florida Keys Council of the Arts and Keys to Be the Change. Media Voices for Children provided funding for printing and mounting and created “Behind Barcodes,” the action kit that Erika used to introduce the issues of child labor and human trafficking in schools. For more information, visit www.tskw.org or contact The Studios at 305-296-0458 or Erika Biddle at 305-567-1610. The Studios of Key West is located at 533 Eaton St., with gallery and box office open Tuesday through Saturday from 10 a.m. until 4 p.m.

If Erika’s work has stirred your own inner activist into action, you can learn more about working to end human trafficking at www.30actions30days.org and www.behindthebarcodes.org. ¦