BARTENDER OF THE WEEK 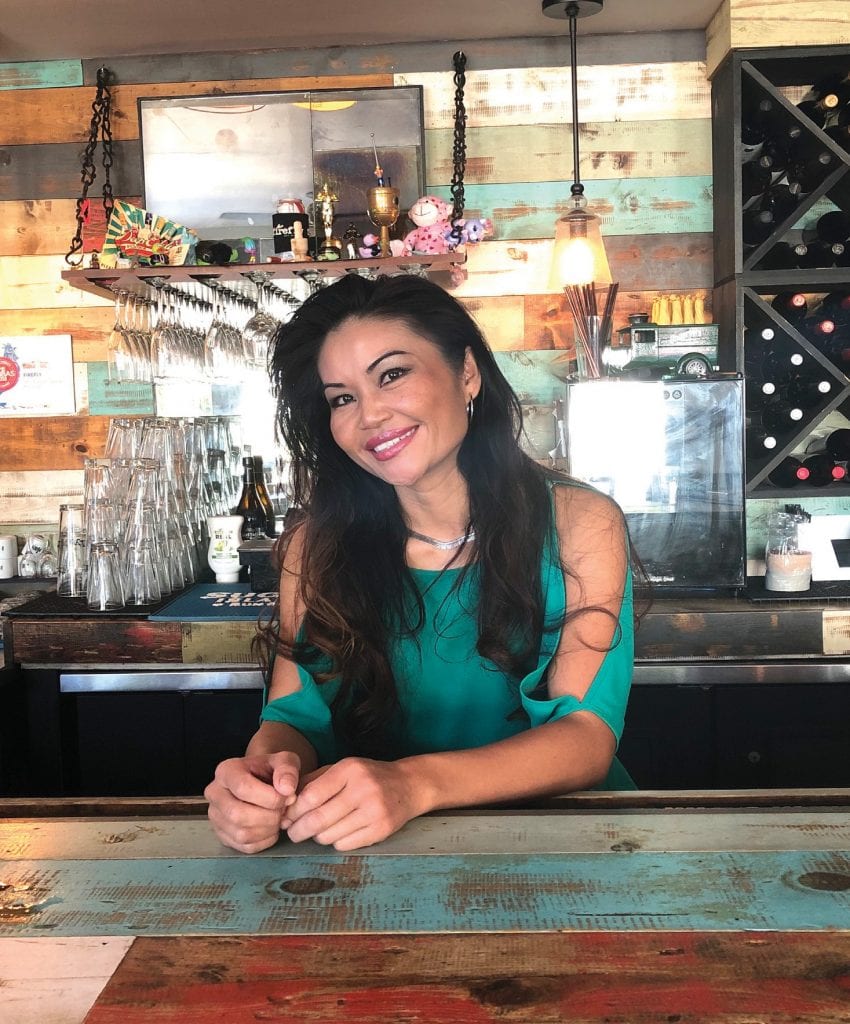 Kayla behind the bar at Firefly. COURTESY PHOTOS

Down here in the southernmost ZIP code of the United States, there are many stories like Kayla’s where the American dream isn’t always just about the Benjamins but also, and maybe more importantly, about quality of life. Sure, she studied economics and finance at University of California Santa Barbara and international business at the University of North Florida. She’s worked in competitive sales for CNBC in NYC. She rubbed shoulders with the likes of Kevin Harrington as a media marketing associate and succeeded in big cities like LA as a project manager.

She comes from a Thai heritage and has lived in Paris for a year and, because of her unique exposure to the world, can now speak four languages fluently. She’s a downright girl boss who has discovered that the infinite pursuit of happiness isn’t always found in the rat race, but sometimes along the sidelines. And sometimes, it is found behind a bar on a Caribbean island.

“Quit your job, buy a ticket, get a tan, fall in love, never return.” In the end isn’t that what we all want? To find something that makes us slow down a little. 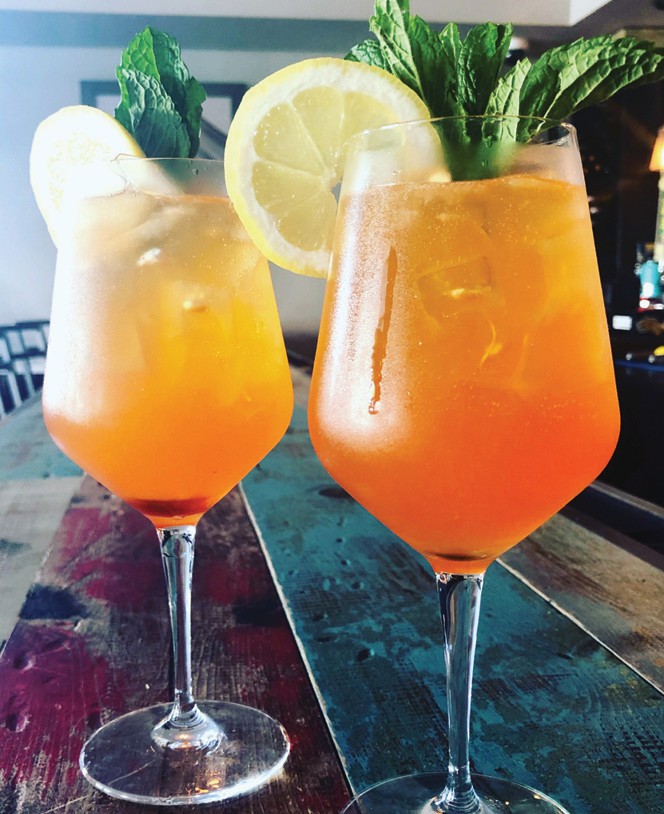 Above: The new spritz cocktails at Firefly.

“I fell in love with the restaurant,” Kayla Chanthavong says of Firefly, where she has been both a bartender and a server for over two years. “When I met the chef, he was giving so much attention to the plating of fried chicken and I thought, ‘I want to work in a place that puts this much pride into their work.’”

The highly acclaimed Russ Ferstle has been at Firefly since opening day and is the culinary genius responsible for the only white linen version of Southern cooking in Key West. He has long gained the respect of Kayla, who has probably spent just as much time eating at fine dining restaurants as she has spent working in them. At the same time, she has gained his respect as a front of house warrior who truly cares about her commitment to the job.

She’s no stranger to the industry, whether it be on a professional or personal level. Kayla is the very definition of a gourmet, which is what exclusive foodies were once called before the common foodie became a thing. 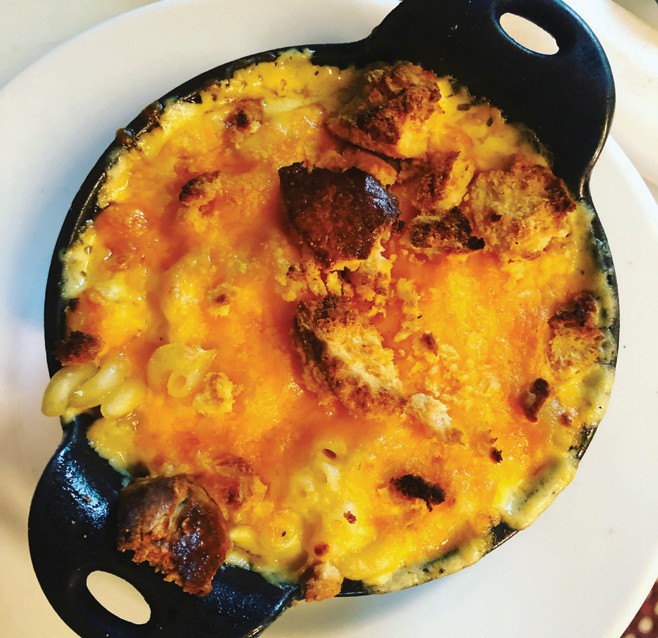 Right: The mac and cheese is one of Kayla’s favorite dishes at Firefly.

“When I first met Kayla, she was always asking questions like, ‘What is in that?’ Or, ‘How do you make that?’” Chef Ferstle explains. “That’s what makes her different and good at what she does. She wants to learn.”

“I mean, I’ve read the ‘Food Lover’s Companion’!” she exclaims.

At the beginning of one of her first shifts, a manager playfully tried to trick Kayla by pouring a wine twice for her to judge blind. She knew right away, without flinching, that it was the same drink in both glasses. Having grown up in the backyard of Lodi, Calif., Kayla was raised seeing vineyards every day. Though, of course, she wasn’t able to drink until she was 21, these days when it comes to wine, not much gets past her palate. Now, sharing that lifelong passion is one of her favorite things.

Flashback to a younger young-Kayla who had just moved to Florida, when the world of food and beverage presented itself to the young woman as a dare more than a truth. While enjoying just another night on the town at Marchands Bar & Grill in St. Petersburg, where her family has lived since moving from the West Coast, she was told that she would never be able to land a job at a big-league restaurant because she didn’t possess any skills in the industry. That was all it took to get her to consider hospitality as her next career move. The truth was, she had plenty of valuable skills, like a winning personality, and with a little bit of ambition she soon became one of their star employees.

“They told me I couldn’t do it, so I did. I got a job at Marchand’s and they even let me pick out my schedule. That’s not something that usually happens when you don’t have any experience.”

Since then, Kayla has worked in Key West at Mangoes Restaurant and the Grand Café, but it is Firefly that has captured her heart.

“I just love coming to work here,” she emphasizes. “I enjoy everything that we do. This place has taught me about beer selection. Now I’m excited to work with the new aperitif menu that we have. I just really like where this is going and it already does well.”

Kayla likes to talk, but she knows just what to say. She can entertain a conversation,co but never really reveal anything unless you pay enough attention to ask. She’s friendly and outgoing and it is hard to catch her without a smile.smile She’ll tell you in detail all about the dishes that Firefly serves, like the crispy buffalo pigs ears with pickled carrot and blue cheese or the braised bison short rib on an Anson Mills grit cake with roasted cauliflower and demi-glace, or the new cocktail menu that now includes a spritzer of the day, a pink mojito and a ginger apple mule made with amontillado sherry, green apple puree, ginger syrup, lime and club soda. But she’ll also tell you that during the day, she still keeps a little bit of her former self alive as an entrepreneur, writing business plans and real estate contracts. She’s just doing it from the window of her paradise.

Firefly is open seven days a week and serves brunch from 10 a.m. until 3 p.m. and supper from 6 p.m. until 10 p.m. daily. Kayla can more often than not be found working supper service every day except for Tuesdays and Wednesdays, with the extra occasional shift in between. Follow the restaurant on Facebook @FireflyKeyWest or by visiting its website at www.fireflykeywest.com. ¦