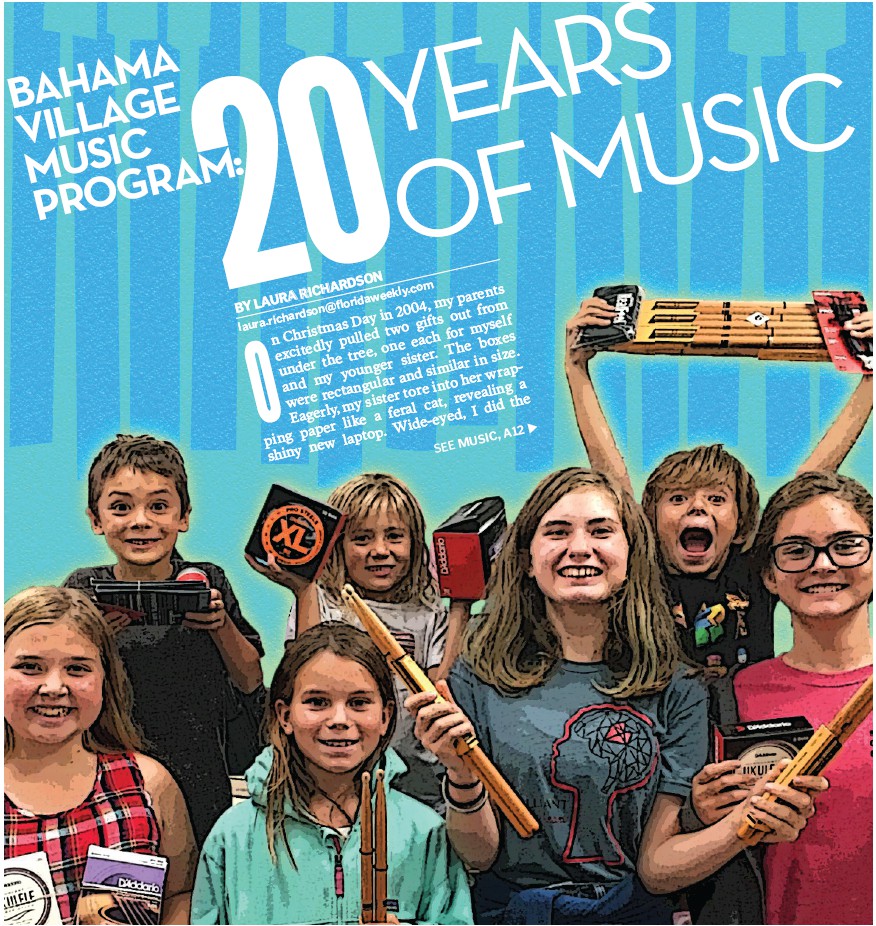 On Christmas Day in 2004, my parents excitedly pulled two gifts out from under the tree, one each for myself and my younger sister. The boxes were rectangular and similar in size. Eagerly, my sister tore into her wrapping paper like a feral cat, revealing a shiny new laptop. Wide-eyed, I did the same… and unwrapped a clarinet.

I’d love to pretend that 17-year-old me was gracious and grateful and effusively thankful to my parents for recognizing my deep love for making music, but the reality was probably anything but. I was too old for tantrums, but I couldn’t fathom the gifting injustice that had been wrought. (I blame my underdeveloped teenage frontal lobe.) My sister could chat away with her friends on AIM from the comfort of her bed while I sullenly practiced “Jupiter” from Holst’s “The Planets” suite. It just wasn’t fair.

Above: A BVMP student practices the trumpet with a student-teacher. Below: Katchen Duncan and Kate Divoll celebrate 20 years of the BVMP.

But when I reflect on the things I am most passionate about as an adult, music is still in my top five (the other four are food-related, but I digress). And according to a wide body of neurological and psychological research, I owe my parents immense gratitude for the clarinet that is currently collecting dust in my living room. It seems like every time I open up my laptop, I see a new study touting the benefits that music lessons provide to developing minds.

For example, one incredibly comprehensive study done by the German Socio-Economic Panel in 2013 stated that music “improves cognitive and non-cognitive skills more than twice as much as sports, theater or dance.” In addition, that same study found that kids who take music lessons are “more conscientious, open and ambitious.” A 2016 study done by the University of Southern California’s Brain and Creativity Institute found that childhood musical education can actually accelerate brain development, particularly in the areas connected to reading skills and language acquisition, meaning that children who study music tend to have larger vocabularies and are better able to synthesize and retain material they read. 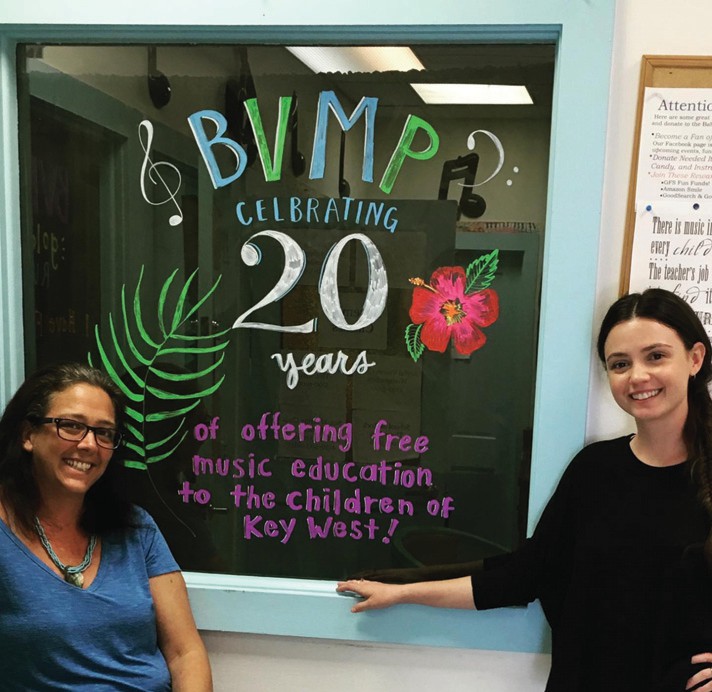 Other studies have shown that early music exposure benefits the development of perceptual skills, which affect literary and language abilities; spatial reasoning, which aids in math- and engineering-related skills; and fine motor and hand-eye coordination, which apparently has kept me from missing a bunch of fly balls in the outfield. The best part? All of the apparent benefits of music education apply regardless of socioeconomic status, which means that providing music lessons to the underprivileged can have a massive impact on their academic and social development despite their lack of access to financial resources.

In a nutshell, music education has broad and myriad benefits for children lucky enough to have it — increased IQ , advanced reasoning ability, better memory, more creativity, increased emotional intelligence and even better motor skills. And aside from having higher test score results and the ability to dribble a basketball and run at the same time, children who study music tend to experience social and emotional impacts that are just as critical, if not more so, than academic achievement. Music helps us express and moderate emotions, relieves stress and encourages creativity. 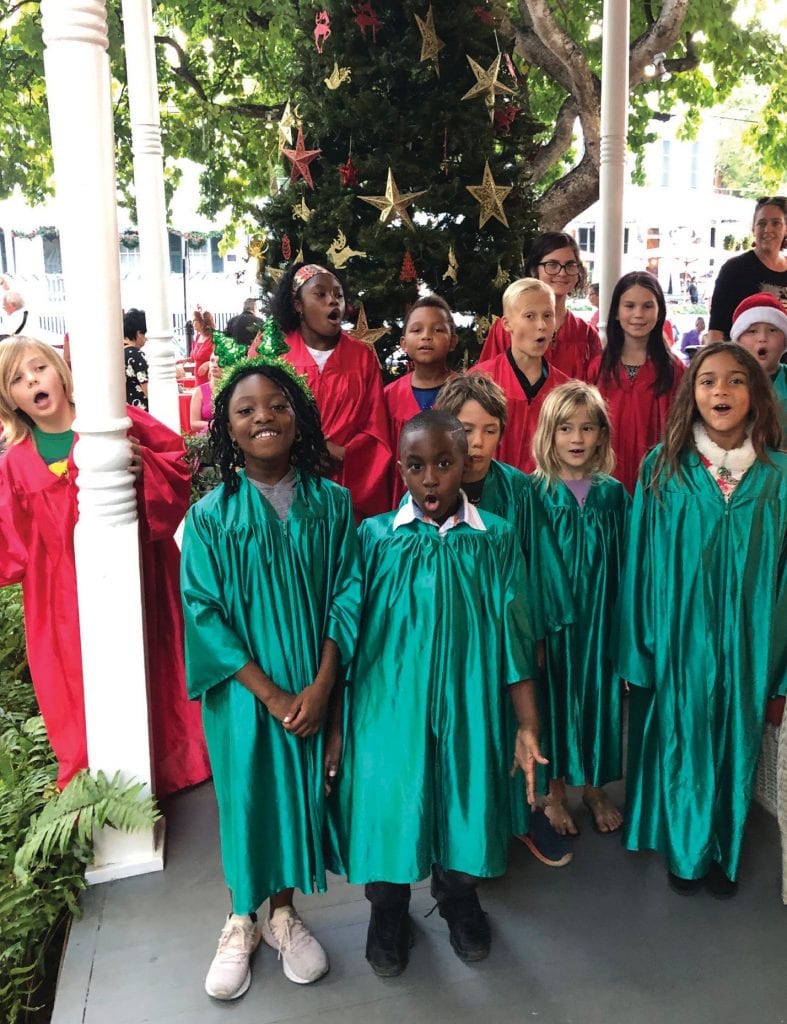 And at a basic and fundamental level, in addition to all of the cognitive benefits music education bestows, making and listening to music is a direct pathway to, in my opinion, the greatest benefit of them all — feeling. In international surveys, people consistently rank music as one of life’s greatest sources of pleasure. Music makes us laugh (“coo-coo-ca-chu”) and cry (Joni Mitchell’s “River” always gets me). Music provides the backdrop for weddings, graduations and funerals. It’s everywhere, and it has been since the beginning of time (literally — among the oldest objects discoverers have found are flutes that were carved from mammoth bones about 43,000 years ago).

But despite the overwhelming amount of evidence indicating that music has beneficial effects on cognitive, spatial and social skills, music is disappearing from general education curricula worldwide. When education departments are starved for funds and forced to slash budgets, extracurricular activities such as music lessons and theater are the first to go. And our overwhelming preoccupation with test scores and Ivy League school attendance emphasizes spelling tests and math tutors at the expense of participation in band and orchestra.

In a world where the arts are systematically disappearing from schools nationwide, the existence of organizations like the Bahama Village Music Program is more critical than ever. The BVMP’s mission is to provide quality musical education to children aged 6 to 16 who would not have access to private music instruction otherwise. The program was created in 1999 to honor Ellen Sanchez, a beloved Bahama Village music teacher who taught local celebrity musician Coffee Butler and whose retirement left a void in the community. After teaching for over 50 years, Sanchez passed away in 2008 at 105 years old (though that figure is difficult to corroborate, considering the legend herself wasn’t quite sure exactly what year she had been born). Eventual founder Robin Kaplan stepped into Sanchez’s outsize role in the community and established the BVMP.

The program had modest beginnings, operating out of the closet of a school gym, but now resides in the Frederick Douglass Band Room, a refurbished historic building owned by the city and located in the heart of Bahama Village. Today, BVMP is run by Executive Director Katchen Duncan, a Florida Keys native who was a beneficiary of the very program she now directs. Duncan studied piano under Kaplan, who recruited her to teach at BVMP in 2002. She became program director in 2004 and ascended to executive director status in 2005.

Her right-hand woman, Kate Divoll, has served as program director at BVMP since 2015 and she, too, is a BVMP alumna. “My BVMP journey is very homegrown,” she says. “I started taking piano lessons at six years old. I was a student and a teen teacher before serving as assistant director, then I got my Bachelor’s degree at University of Florida and returned to BVMP in 2015.”

Currently, about 170 enrolled students receive lessons from 15 student teachers, professional instructors and volunteers at their Bahama Village location, but outreach programs extend the BVMP student population to over 200 lucky kids. BVMP’s student teachers are musically gifted high school students, many of whom honed their musical ability at BVMP and are now paying their education forward. The young staff inspires younger students to practice their instrument daily, with the goal of being as musical as their teenage teachers. The student teachers also foster mentor-like relationships with their students, some of which last through college and beyond. This unique aspect of the music program enables the students to connect with each other through their shared love of music.

The free-for-students BVMP offers individualized lessons in piano, guitar, flute, clarinet, saxophone, trumpet and percussion and group lessons for steel pan (sponsored by the United Way of the Florida Keys at the Horace O’Bryant School), choir and praise dance, but the program will provide a teacher for any instrument a student wants to learn (my condolences to the parents of the child hell-bent on learning the tuba). The organization also provides classes in music theory and songwriting and students can participate in the in-house band, School of Rock, which is basically a rock band full of little kids. And according to Duncan, yes, it is as adorable as it sounds. “It’s that awesome and more,” she says. “I have expectations every week, and the kids far exceed them.”

The program also sponsors Keys Kids Junior, which puts on musicals throughout the Monroe County School District. Students build sets, make costumes, act, direct and produce the entire musical. This year, the kids will perform The Wizard of Oz in the Key West High School auditorium on Feb. 14 and 15, thanks to the Community Foundation of the Florida Keys.

2019 marked the 20th anniversary of the founding of BVMP and, over its lifetime, BVMP has provided music education to over 2,000 local children.

“There’s a tremendous sense of community spirit and pride behind the program,” says Duncan. “It fosters important mentor relationships between local teenage musicians and their students, encourages parent participation and enhances students’ self-esteem. Bahama Village is rich in cultural history and community involvement, and we get so much support from the local community.”

That support often includes donations in the form of instruments, whether solicited or not.

“We have not had to purchase instruments ever, practically,” says Duncan. “Every time we think about needing an instrument, it somehow appears. One year we needed a harp, of all things, and lo and behold, a harp just appeared.”

As one would expect, Duncan is an avid advocate of musical education as a necessary component of development for every child, regardless of their background.

“I really believe in the power of music education,” she says. “It breaks down barriers. It enables kids to have better cognitive development. It shouldn’t be constrained by income — it should be available to every kid because it’s part of a well-rounded childhood. That fact is very evident from the way our kids react to the learning and joy that we instill in their lives.”

The range and breadth of programming at BVMP has grown tremendously over the years, but the program’s directors have ensured that they don’t stray too far from their roots.

“One thing that has always been the same is that we definitely stick to our mission,” says Divoll. “We don’t turn any child away — that has never changed, and I hope that never changes. The only thing that has really changed is that we can serve more children now, and that is great. Bigger is better.”

“We are a big, giant, messed-up family,” Duncan adds. “But we’re here for the kids every day and it’s important that they know that and that they have somewhere to go that’s safe and educational. We believe that this is changing their lives. We cry at least once a week from seeing the impact we have. For example, during summer camp we took away everyone’s phones. Nearly all of the middle schoolers forgot their phones more than once at the end of the day and had to turn around and come back to get them. They told us how nice it was to not be so distracted. Also, our students keep coming back. Not a week goes by that we don’t have a visit from a former teacher or student teacher.”

This spring, in honor of its 20th anniversary, BVMP will take over the Coffee Butler Amphitheater at Truman Waterfront Park for a full day of family-friendly fundraising. The event will be free to the community, with vendors, activities and even a bounce house (which is not adult-friendly — I asked). As part of the anniversary celebrations, BVMP will also host a gala at the Oldest House & Garden Museum on April 4, 2020, which will be the highlight of a year-long series of events. Tickets for the gala will go on sale on Jan. 1, 2020.

“Every child deserves the opportunity to experience the joy of music,” Duncan says. “And at the BVMP, we are creating not only better musicians but better human beings.”

So, in retrospect, thanks for the clarinet, mom and dad. It may not always seem like it, but science says my music education made me a better — and happier — human being. ¦

One response to “BAHAMA VILLAGE MUSIC PROGRAM: 20 YEARS OF MUSIC”