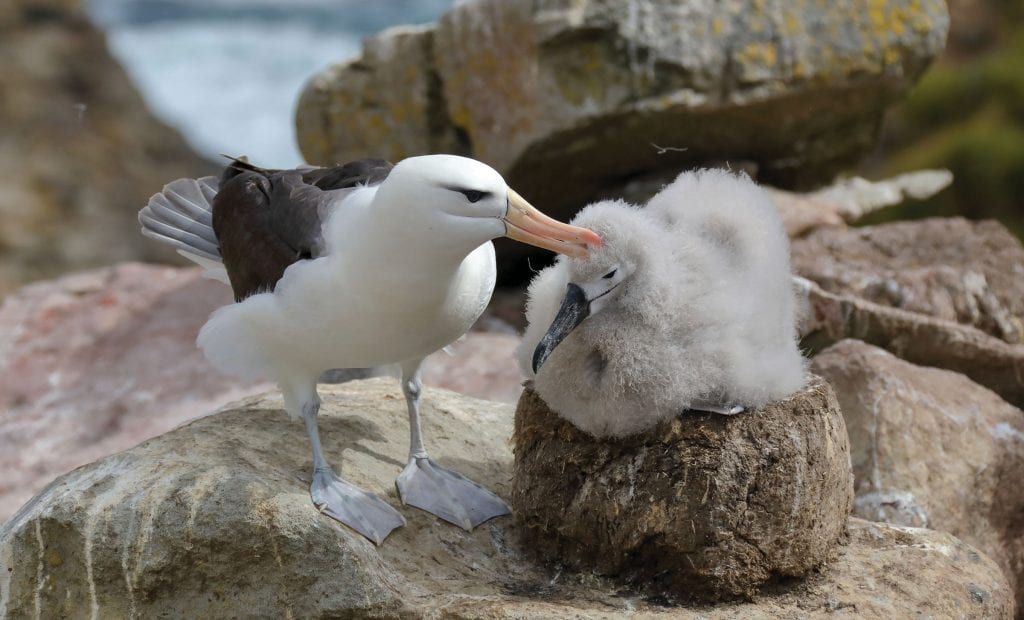 Special precautions are necessary when photographing these youngsters — disturbances might hurt their chances of survival, and scared or stressed-out birds make lousy photo subjects anyway. But for those photographers who take the extra steps to be responsible and alert while attempting to capture moments of young birds, the rewards can be great. See for yourself with this sampling of entries from the 2019 Audubon Photography Awards.

After you have your daily dose of avian adordableness, go to www.audubon.org/magazine/summer-2019/the- 2019-audubon-photography-awards-winners to see the 2019 winners. If you want more, go to www.audubon.org/ magazine/summer-2019/the-2019-audubon photography-awards-top-100 to see the judges’ picks for the Top 100 entries for 2019.

It’s too late to enter the 2020 contest, but we can all look forward to seeing the winners when they are announced on or about July 8, 2020.

Interested in entering the 2021 contest? A great place to start is by reading Audubon’s Guide to Ethical Bird Photography. It’s at www.audubon.org, where you can also find more information about the annual contest for which the top prize is $5,000. ¦

Western grebes build floating nests in shallow water. Within minutes after each egg hatches, the baby grebe crawls up onto the back of the attending parent and nestles in under the feathers. After all the eggs hatch, the parents swim away with the chicks —becoming, in effect, the new floating nest for their charges. For at least the first couple of weeks, the baby grebes will spend most of their time riding on their parents’ backs, with the two adults taking turns carrying the offspring and diving for food. 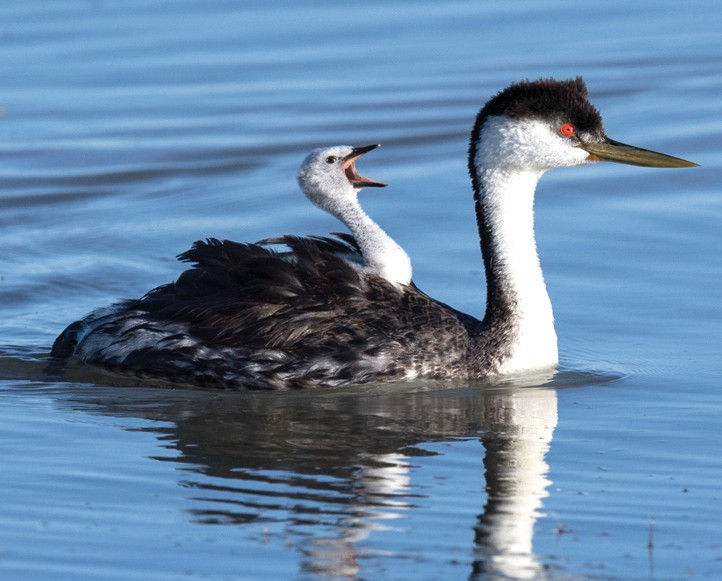 One of the most bizarre and primitive birds on Earth, the hoatzin — an ungainly, leaf-munching fowl of the water’s edge in South America — has no close relatives. Its babies look just as strange as the adults, with an added prehistoric twist: They have rudimentary claws on their wings, useful for helping them climb back up to their nests if they happen to fall out.

Large seabirds have lengthy childhoods. A pair of adult black-browed albatrosses take turns incubating their single egg for at least two months until it hatches; then another four months will pass before the young bird learns to fly. This fuzzy youngster, being preened by one of its parents, still has many weeks to go before it will be able to spread its long wings and take to the air.

There are inherent risks to nesting on the ground and out in the open. Piping plovers of all ages are well camouflaged against pale sand beaches, but even so, their downy young leave the “nest” (a simple scrape on the ground) within a few hours of hatching. The young can flap their small wings and lift off the ground by the time they’re three weeks old, but it can take up to five weeks before they’re capable of strong flight. 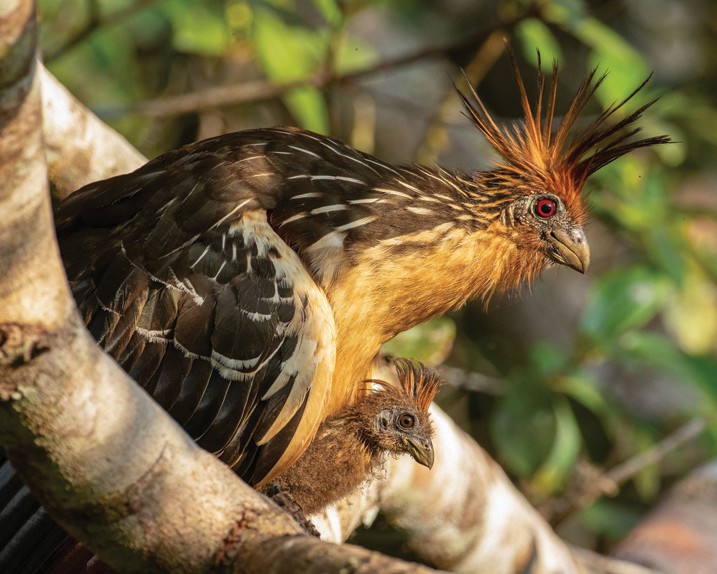 Originally native to the Old World, the cattle egret spread from Africa to northeastern South America in the late 1800s, reaching North America by the early 1950s. It’s now common coast to coast here, especially in the southern states. Although cattle egrets mostly feed on insects in open fields, they usually nest near water in colonies with other herons and egrets.

A baby common loon comes out of the egg already covered with dense down, and within a few hours it can take to the water, swimming and even diving as it follows its parents. The chicks use a different technique to stay submerged, however: Adult loons propel themselves underwater entirely by using their feet, but the babies are so buoyant that they must use their tiny wings, as well as their feet, to try to keep themselves below the surface. 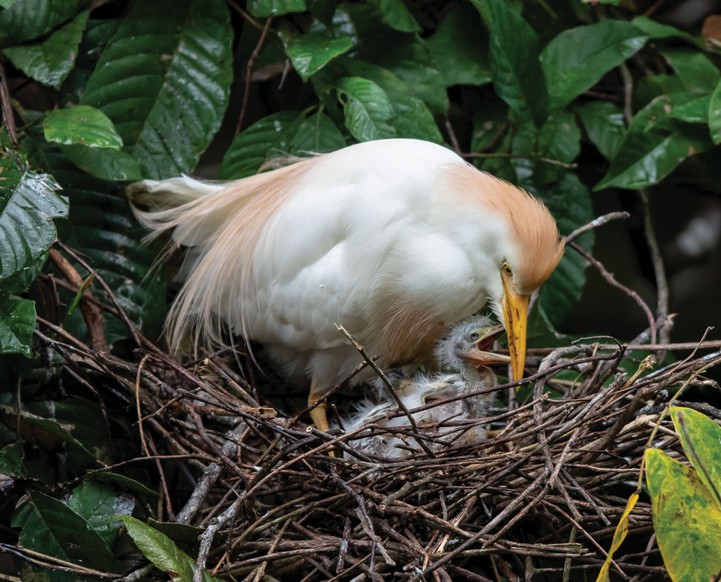 Although young sandhill cranes can walk well enough to leave the nest within a day after hatching, they make little effort to feed themselves for the first several days, being fed almost entirely by their parents. After a couple of weeks, they begin to find more and more of their own food, closely watching their parents to pick up pointers on foraging methods. Young sandhill cranes are often referred to as “colts,” which fits well when they’re in this leggy, rangy stage. 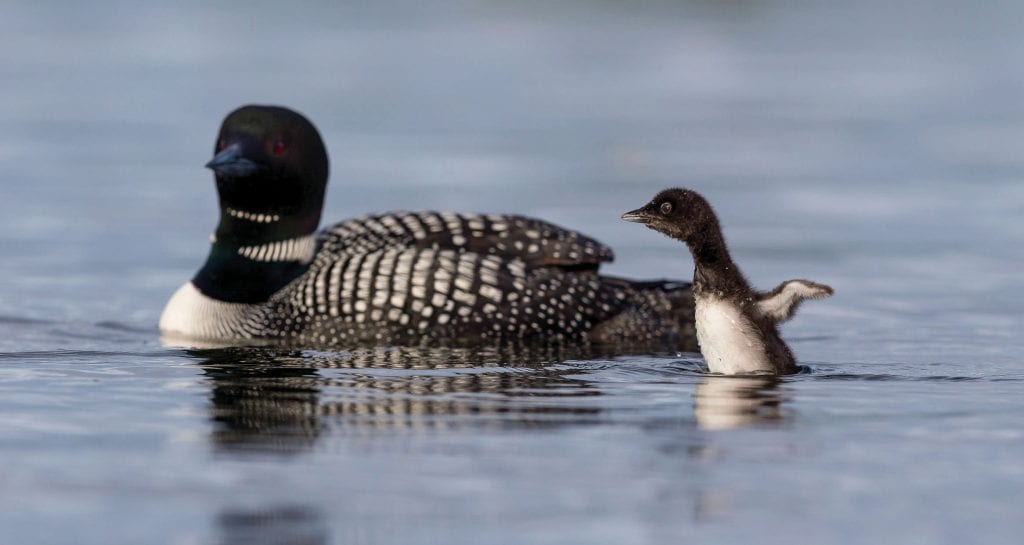 Considering the elegant grace of adult herons and egrets, it’s remarkable just how gawky and awkward their youngsters can be. Young green herons hatch out in twiggy nests up in trees, often above the water. By the time they reach the age of two weeks, they can climb about in the tree, especially if danger threatens, but they won’t be able to fly well until they’re more than three weeks old. ¦ 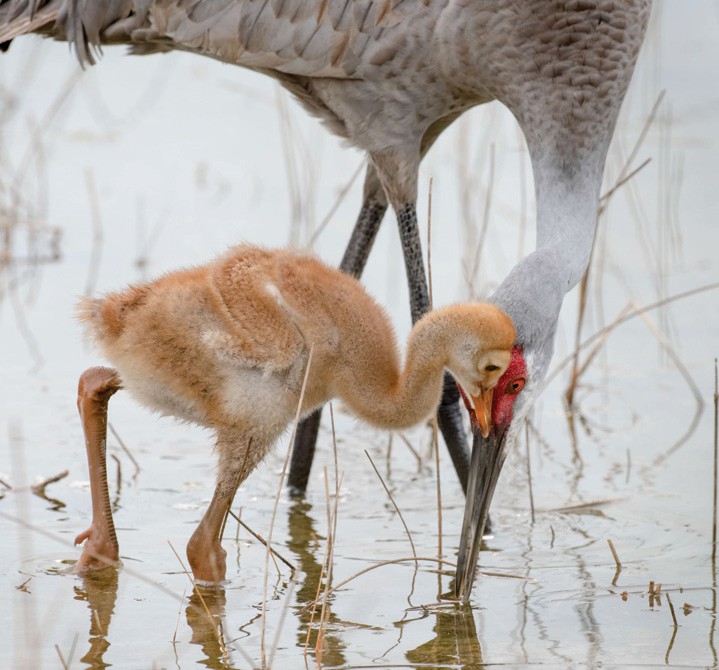 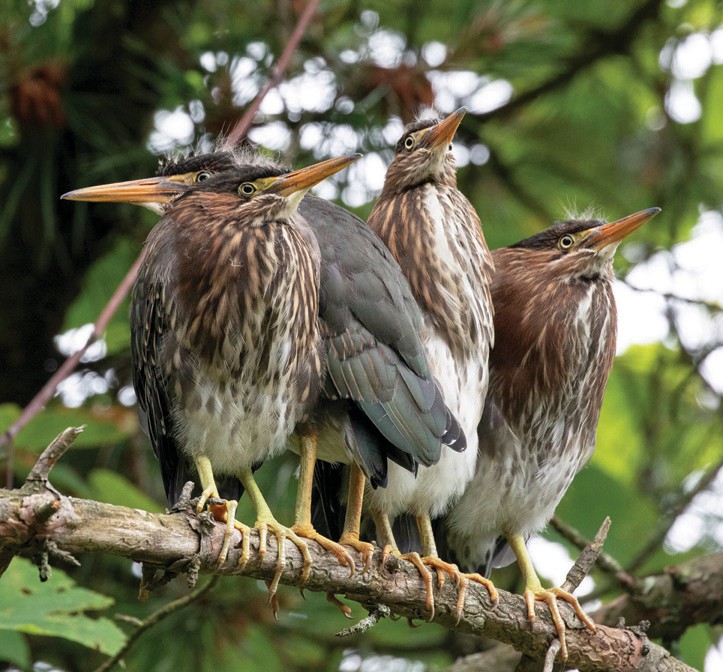