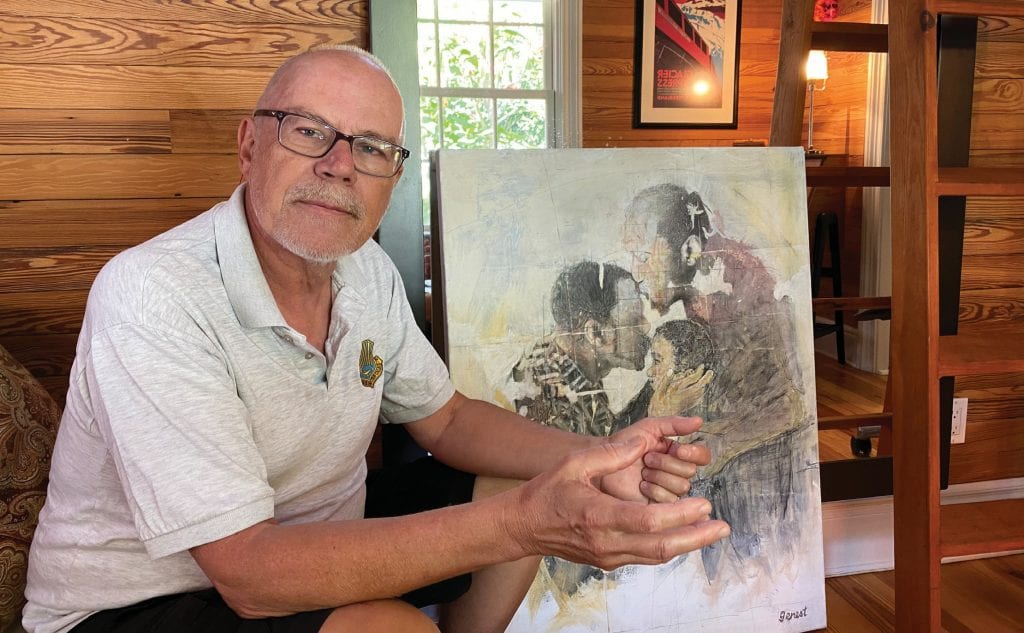 David Genest explains his paintings during a recent interview at his Key West home.

David Genest calls this one “Flesh and Blood,” a mixed media on canvas painting that depicts a family of two men and a child. It’s like a snapshot. The three are connected by a triangle of kisses: A man kisses the forehead of his partner, who in turn kisses the boy’s forehead. The child is always the center of this series of images he calls “Legalized Love,” always framed by same-sex couples, and always being adored.

In this instant, in the frozen image, no one is marginalized. The family’s makeup isn’t an issue. It just is.

“Legalized Love” runs through March 26 at The Studios of Key West (533 Eaton St.) in the Zabar Project Gallery. Genest will give an artist talk about his work on Tuesday, March 24, at 5:30 p.m. at The Studios. The talk is free and the public is welcome.

“Marriage is a legal contract,” said Genest, 69, a Hempstead, New York, native, who is affable and speaks with a Yankee accent. “The love thing, it’s great, you expect it. But it’s a legal contract. You’re legally bound.” 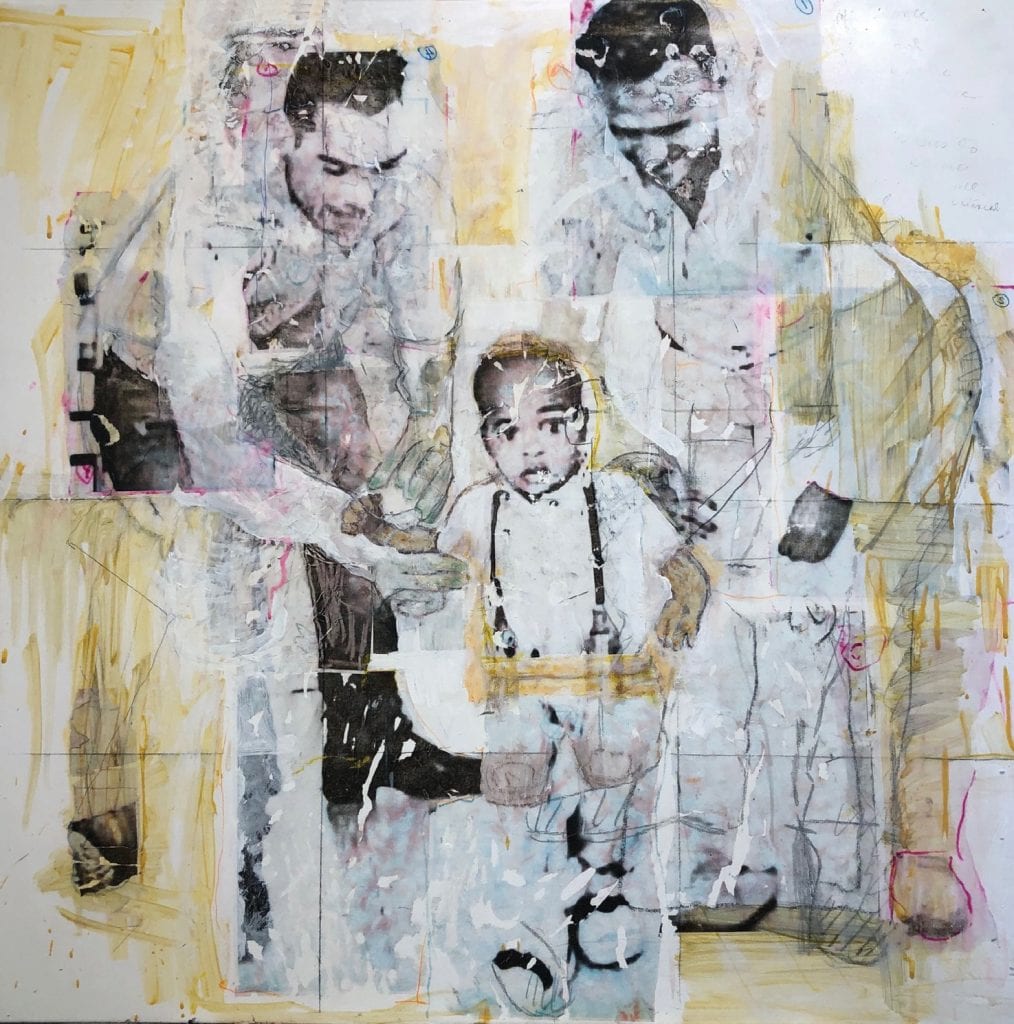 A piece from David Genest’s new exhibit at The Studios of Key West.

Genest is a lifelong portrait painter. But he always stuck to the faces, from the chin to the forehead. “I decided I wanted to move onto something larger,” Genest said. “I was struggling to figure out what should I do.”

He read an article in The New York Times about whether portrait painting is dead. It isn’t, the article concluded, but it has been increasingly dominated by marginalized groups, such as African Americans.

“It occurred to me, I’m a gay, married man with a son,” Genest said. “I’m really part of a marginalized group because a lot of people hate us. Forty percent of the people in the country think we shouldn’t even be married.”

Genest chose to do warm, intimate portraits of families touching and looking at one another. “Nobody can not feel good when you look at them,” he said. “You can even ignore the fact, I think, that it’s a gay or lesbian couple. It doesn’t jump out.” The focal point is always the young child.

In North Carolina, at a conservative- type gallery, people thought that the “Flesh and Blood” characters were a grandfather, his son and his grandchild. “What I decided is, art is really what people think about it,” Genest said. “If that’s the way they interpret it, that’s fine. I think it’s a good painting.”

But this time, “Flesh and Blood” is part of a show called “Legalized Love,” an obvious title that points at the legalization of same-sex marriage. “It’s almost like nativity paintings with the baby Jesus and the mother and father where everyone’s looking at the baby,” he said. “The baby is the center of every single painting. It’s really paintings about children and their parents.”

Several of the portraits of “Legalized Love” were on the walls on a recent morning as Genest gave a visitor a tour, which included his pool-side art studio, which is as organized as the home. “Gay marriage is a benefit to the children,” he said. “Because the children become equal to other children. They’re legally protected, just like other children are. People that get married are doing it largely because of their kids. So marriage equality actually gave a great civil rights benefit to babies. Isn’t that cool? I didn’t realize that until I started the paintings.”

Genest is a retired physician who doesn’t use the title these days. He was an obstetrician-gynecologist and later a pathologist. “I was always frustrated because I have liked to paint since I was a little kid,” he said. “From the time I was 5 years old, I wanted to be an artist.”

He studied painting at the School of the Museum of Fine Arts in Boston, The Fine Arts Work Center in Provincetown, Mass., The Studios of Key West and The Bascom Center for Visual Arts in Highlands, N. C. Genest has a still life painting he did in the basement of the house he grew up in. He was 15. It hangs in a corner of his home.

“I didn’t even finish it,” he said, laughing.

Genest said artists are born artists. “An artist is someone who loves to play and create things,” he said. “It doesn’t matter if it’s a writer, a sculptor, a cinema artist or a painter. They’re doing the same thing. They’re expressing themselves.”

For more information about the artist, visit DavidGenest.com. ¦