America 2.0: Her majesty of the sea 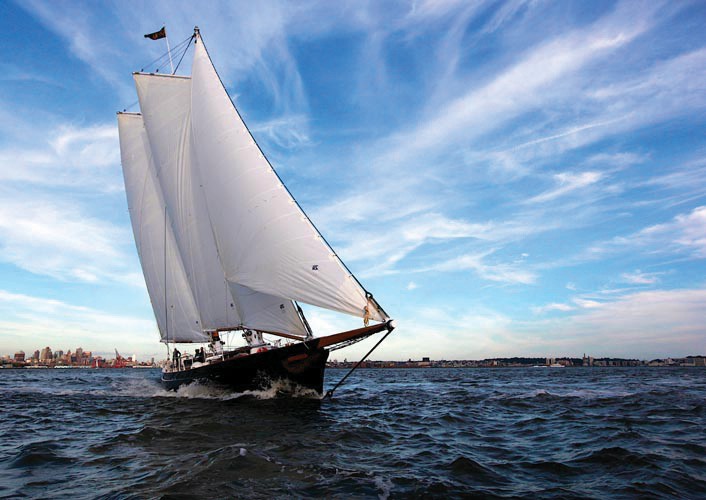 The majestic America 2.0 runs trips in Key West in the winter and cruises the Hudson River area in the summer.

It’s 1851. The Industrial Revolution has swarmed civilization on both sides of the Atlantic. A New York lady restlessly shimmies away from her slip. Shaking her constraints, she dances into the Hudson River. She runs east, crisply navigating the ocean’s offerings, bound for England. Her pride swells up the sails, the lashing water accelerating her 170 tons toward the Isle of Wight, victory as aspiration.

For what awaits is an invitation to hallowed ground, to be crowned winner of the inaugural Great Exhibition Race, the 100 Guinea Cup. Completing the course just shy of 11 hours, she outduels 14 other schooners. She returns, glowing in jubilation, as her crew raises the bottomless silver ewer, weighing 134 ounces. The America’s Cup is born!

Fast forward over 150 years. The technological revolution has swamped the lands, the world far removed from the days of Christopher Columbus and Vasco De Gama. Russell Crowe is still trying to reach the far side of the world and I am being whisked away on the America 2.0, a combination of a loose replica and a tribute to the original America. 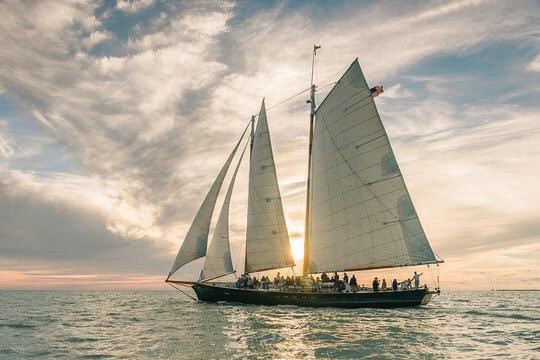 Key West humbly accepts her, all 105 feet and 3,600 square feet of majestic boat building. Running trips in the tropics of the Florida Keys during the onsetting winter, she also gracefully glides on the Hudson River during the sultry blanketing of summer. It’s a joy to have her cramped tall among the docks of the Historic Seaport. Her carbon fiber masts, sheathed in cedar, rise gallantly, as she bobs her stature in sight of grazing tourists. Many of them, in the slippery flow of happy hours, are doused with awe, as they gaze past their vodka gimlets and into the centurion eyes of her sails. She commands respect and it is with this as my ticket that I stepped on board for the sunset cruise excursion.

My legion of interest would be accommodated by the erudite and passionate Heather, manager and also one of the captains. Both her ocean-going zeal, rooted and fertilized at a young age, and luck conspired to place her onto the America 2.0. Having been integrated into that boating family in her early twenties, she has an expanse of knowledge and eagerly wants to dispense it. 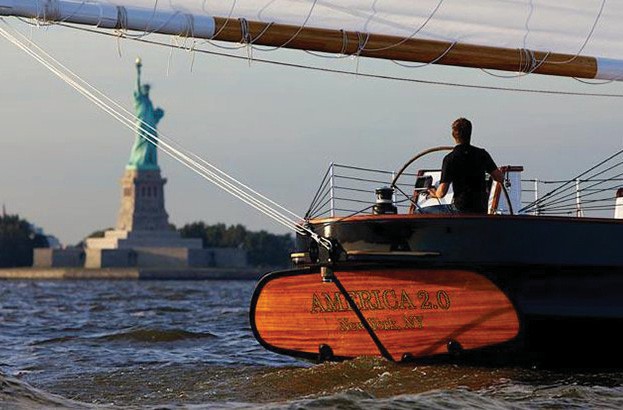 “She was built in 2011, about a two-year and $3 million project,” Heather explains. “Rick and John Scarano, brothers out of Albany, New York, built the boat. John is the naval architect. He designs all of our boats.”

Capt. Amber purrs the engines into life, with mates Jim and Josh on deck. It’s a cozy knit family, evident in the warm gestures and comfortable energy floating throughout the boat. As she silently reverses, I become aware of the low din, her engine humming nonchalantly, quietly caressing her underbelly. Heather notices my intrigue.

“The electric engine runs on a very large system of lithium-ion batteries,” she states. “The idea of the batteries is that they would be a supplementary propulsion system to the diesel engine that we have on board. It took us about seven years to get approval from the Coast Guard.” 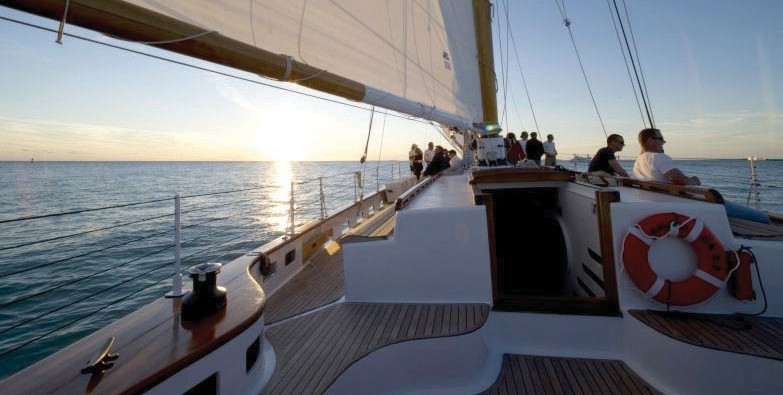 The America 2.0 shifts her way out of the seaport, and once in position, Capt. Amber holds her ground as Jim and Josh give flight to her sails, hoisting them flush to the wind. In unison, the sails puff out their chests and she gathers hull speed. Effortlessly, we are eased away from the harbor, the deeper ocean anticipating out arrival.

According to Heather, the “theoretical hull speed can reach up to 14.5 feet, and on a brisk day we are doing 10-12 quite easily.” The winds whip up the sails as the guests are offered drinks. From a wide choice of red, white and rosè wine, to a strong beer selection, there is an ample variety of beverages available. For the bubbly connoisseurs, they have some on offer, too.

“For the sake of comfort for our passengers, we find 25 miles per hour to be at the top end of sailing. Once you get above that, it becomes more of a liability,” Heather explains. 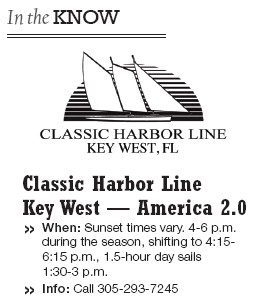 We drift into conversation about the original America. She was designed and built by George Steers and William H. Brown, boat designer and builder respectively, their genius carving up the competition in the first race in England. “She was, at that time, built to be a very modern vessel,” Heather says. “The English had no idea what they were in for, because they saw the model and drawings and laughed at it. Nobody had ever built a boat that way. It was an untested model and became a stepping stone for boat builders from there on out.”

The America 2.0 is thrust into the limelight as Heather dispenses more knowledge about her design. “The reason why she is not a direct replica is because John Scarano built it to be forward thinking in terms of its speed and efficiency,” she says. “The older schooners have very heavy rigging, and John realized that he couldn’t use that model any more. She weighs nothing compared to what she looks like.”

Josh bears down on us with trays of shrimp cocktail and vegetable accoutrements along with a cheese platter, all perfect sidekicks for the French rosè rinsing my palate. The Earth has slipped more toward the end of our day, as the sun brushes her magic across the horizon. Slivers of robin orange hover in between a kaleidoscope of deep ocean blue and canary yellow. Clouds drape their muddy gray curtains, softening the light ever so slightly. It holds my breath hostage, Mother Nature again dancing elegantly across the skies.

We are now facing east, as Capt. Amber, with the capable help of the crew, jockeys the America 2.0 toward Key West. Sailing is earthy. It uses the natural power of winds combined with human ingenuity to bring us as close to oneness with the Earth without treading on its delicately balanced ecosystem. On the America 2.0, Heather is trying to reduce their impact on their carbon footprint.

“Beyond the electric driven motor, we have done a lot as a crew to minimize our footprint. Anything that is considered a single-use plastic, we’ve tried to find an alternative. Our wine cups are made out of corn and our plates are made out of sugar cane,” she informs me.

This decision bears weight on me. Too often, we don’t want to cause that first ripple, that initial stance to be the change we expect in this world. However, if each of us stirred life’s ocean with a cause or belief, the ripples would engulf our morals, creating waves of positive change. Change that boldly affirms our dedication to halt the onslaught of environmental greed.

My green thoughts are interrupted by our arrival back in the harbor. The sun’s rays dilute the last of the daylight. Trails of boats are scurrying back home, too, as the evening delivers a softness to the heat of the day. We dock using the electric motor, quietly returning her majesty of the sea to her moorings. Passing tourists greet her magnificence. She has proven to be influential in how modern schooners are currently being built, and with Heather at the helm of her future, I am extremely confident that she will continue to showcase her exquisiteness for years to come.

We disembark and I thank all the crew for their commitment to making our experience that much more delightful. The original America might have won that race in 1851, served on both sides of the Civil War, and lasted until the 1940s. But in her replica, the America 2.0, we have a lady who strikes you with a glance so endearing that all wars would have been nullified, and peace would be brokered on her decks to last forever. She is the jewel atop the crown, regally accepting her throne and here to serve up golden memories.

I dare you to hop on board and experience the sail of your lifetime!

Beauty in our buildingsTony Sands does Sinatra his wayKEY WEST SNAPS