A sense of renewal 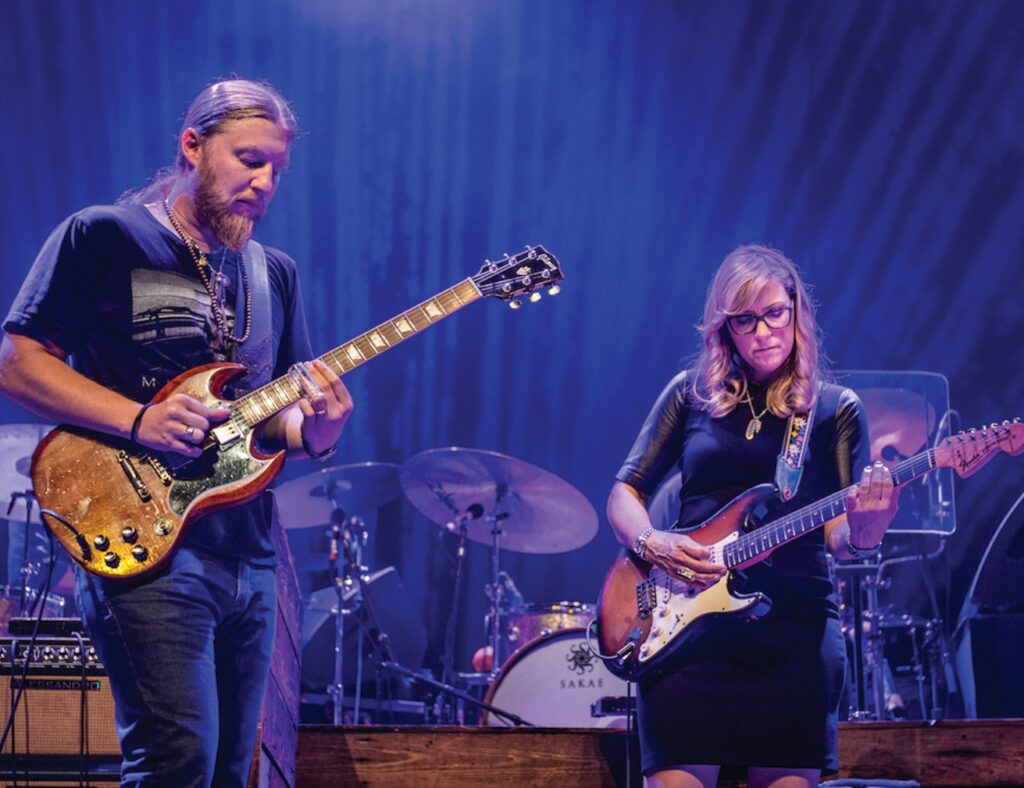 Coming out of the pandemic, there seems to be a real sense of renewal happening with the Tedeschi Trucks Band — which when fully deployed includes 12 members.

For the second straight year, the group had to postpone “Wheels of Soul,” their annual summer festival-styled tour because of uncertainties over what venues would be open and at what capacities this summer. But in place of that tour, a six-person lineup — essentially the core of the Tedeschi Trucks Band — hit the road in June playing drive-in and socially distanced shows. They appear Nov. 14 at Key West’s Coffee Butler Amphitheater.

“We’ve played a bunch of different types of places, like drive-ins, where people have their drive-up spot and then they also like have a pod next to it so they can get up and dance. So that was interesting,” said singer/guitarist Susan Tedeschi in a recent phone interview. “And then we’ve had a lot (of shows) where people have their little spaces, like a little pod area and that’s been cool. People seem to like it. They kind of have their own space to dance and do stuff and nobody right on top of you, which is kind of nice. So it’s been good.” 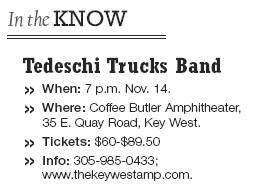 Even better days look to be just ahead. Some of the shows may still have COVID restrictions, but as things stand, Tedeschi and her husband, band leader and guitarist Derek Trucks, have returned to the road this fall with the full lineup.

What’s also exciting is the band — in all its various configurations — is incorporating a lot of fresh material into the live shows. At recent shows, the band has started playing a few songs from the catalog of the Derek Trucks Band, the group Trucks fronted from 1997 until he and his wife formed the Tedeschi Trucks Band in 2010, as well as Tedeschi’s catalog of five solo studio albums she released from 1995 to 2008.

Fans also are getting treated to Tedeschi Trucks Band versions of songs from the classic 1970 Derek & the Dominos album “Layla.” The group recently released the Aug. 24, 2019, performance of the entire “Layla” album from the LOCKN’ Festival. That one-off show included the entire Tedeschi Trucks Band joined by guitarists Trey Anastasio (of Phish) and Doyle Bramhall II (who plays with Trucks in Eric Clapton’s touring band). Clapton, of course, was the featured member of Derek & the Dominos.

The performances from the “Layla” show were inspired and at times quite magical, as the musicians stretched out for plenty of instrumental interplay on “Keep On Growing” and “Anyday” and delivered strong and faithful renditions of such familiar songs as “Bell Bottom Blues” “Tell The Truth” “Key to the Highway” and, of course, the iconic title song.

“It was really beautiful, and having the whole big band there, too, with the horns and the singers, it really just added so much,” Tedeschi said, looking back at the “Layla” performance. “So it was super fun. We had a great time. It was very surreal though, like I remember being very nervous and excited and almost a little overwhelmed just because that stuff doesn’t happen every day.

“Really, it was a great experience to work with Trey,” she added, noting she and Trucks hadn’t worked with Anastasio before the “Layla” show. “He’s really a fabulous guitar player, a super sweet guy, and just getting to hear him and Derek and Doyle all play together was just such a treat. You just don’t get to hear that kind of musicianship all the time.”

“Layla Revisited: Live From LOCKN’” isn’t the only one-of-a-kind concert release in the works. Tedeschi said plans are set to release the 2015 LOCKN’ performance of the Joe Cocker album “Mad Dogs & Englishmen.” The Tedeschi Trucks Band was joined for that show by the 12 surviving members of that legendary tour, including Leon Russell (musical director for the original “Mad Dogs & Englishmen tour), Dave Mason, Rita Coolidge, Chris Robinson (of the Black Crowes) and Bramhall II.

“That is actually going to be a documentary as well,” Tedeschi said of the movie “Learning To Live Together: The Return of Mad Dogs & Englishmen,” which is to be released Oct 22. “Yeah, they filmed a lot of that and it’s being made into a movie. It’s really cool.”

As if that isn’t enough, a new Tedeschi Trucks Band studio album is also on its way, with its release tentatively planned for January. The mixing of the “Layla” and “Mad Dogs” shows and the writing and recording of the album were among the projects that happened during what was a busy period while COVID prevented the Tedeschi Trucks Band from touring.

Tedeschi said the band wrote and recorded 25 new songs during the pandemic. A few of those new songs were debuted during “The Fireside Sessions,” a six-episode livestream live performance series in which various configurations of the Tedeschi Trucks Band also played material from across the group’s back catalog of four studio albums and a host of cover songs.

The new studio album was still in progress when the “Fireside Sessions” — all of which, by the way, are well worth hearing and seeing — were filmed.

“For the livestream, we were still kind of writing the songs. So they weren’t really all the way even finished,” Tedeschi said. “So we have studio recordings of all of those, and more developed because we did have the singers and the horns come down (to record). Once everybody got vaccinated, they came down and they worked for about a week and a half, the horns and the singers, and then they put their stuff on the stuff we had been working on for a few months, the core of the band. So we’ve been really busy mixing records and making records and doing the Fireside stuff and then we’ve been real busy touring.”

Tedeschi said she is really appreciating being able to play concerts again, and feels the group is growing as a unit after what had been a trying period. In February 2019, keyboardist, flautist and songwriter Kofi Burbridge died from complications related to a 2017 heart attack. Gabe Dixon, who also fronts his own Gabe Dixon Band, stepped in to replace Burbridge, while bassist Brandan

“It was very traumatic losing Kofi. And that is not an easy role to play (in the band),” Tedeschi said. “Really moving forward, we feel incredibly blessed with Brandon and Gabe. They really have added so much and they’re such a positive force in the band, and the core is just getting tighter and tighter and we’re learning more about each other and everything from the ‘Layla’ project, everybody loves playing on those tunes, to writing our own stuff to playing old catalog stuff. Everybody is quick learners and really just enjoy doing this again and being able to play live in front of an audience. We don’t take it for granted now after having that time off.” ¦