A SENSE of PRIDE

ANNUAL CELEBRATION OF ALL THINGS GAY RETURNS TO KEY WEST 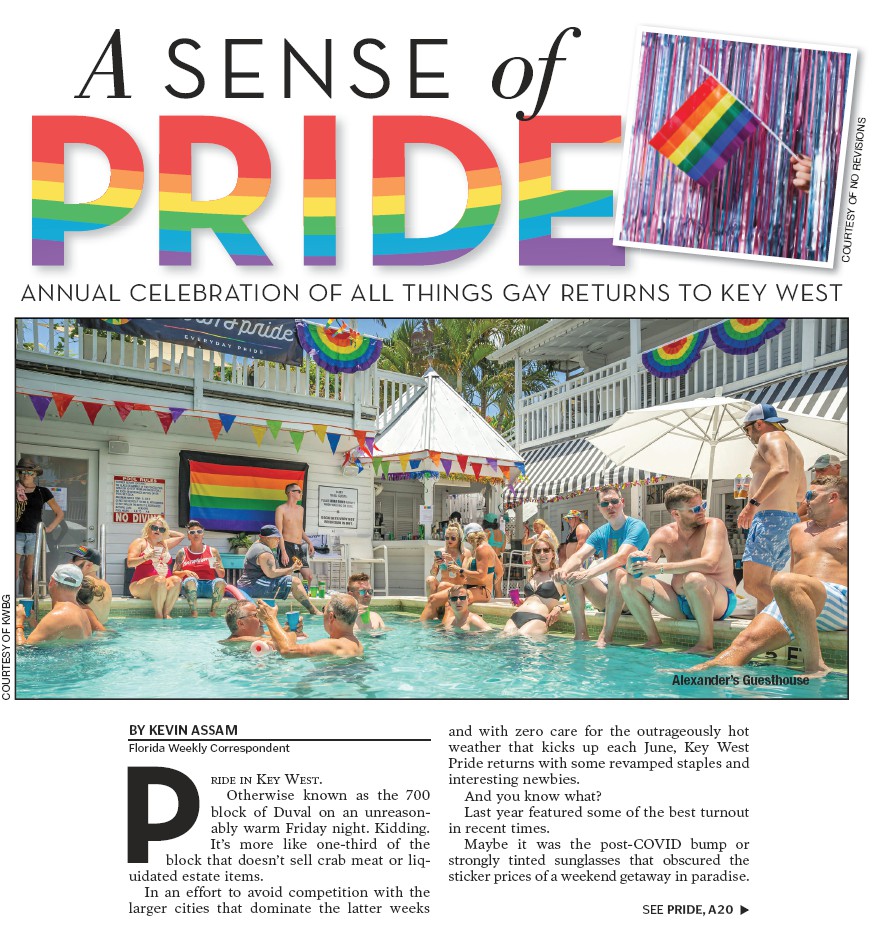 Otherwise known as the 700 block of Duval on an unseasonably warm Friday night. Kidding. It’s more like one-third of the block that doesn’t sell crab meat or liquidated estate items.

In an effort to avoid competition with the larger cities that dominate the latter weeks and with zero care for the outrageously hot weather that kicks up each June, Key West Pride returns with some revamped staples and interesting newbies.

And you know what?

Last year featured some of the best turnout in recent times.

Maybe it was the post-COVID bump or strongly tinted sunglasses that obscured the sticker prices of a weekend getaway in paradise.

Diverse crowds filled the streets. The lesbian population at least tripled. And Walgreen’s even remembered to get some rainbow-riddled merchandise out in time. Good memories for all.

Here are some of the events and cultural affairs you should check out. 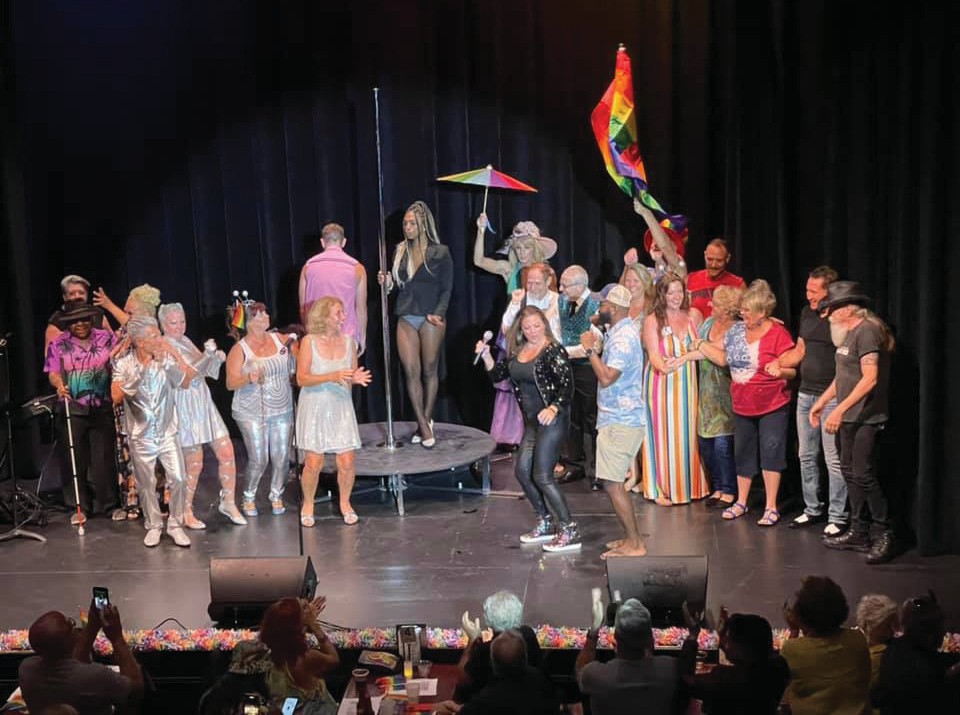 Prayers that no one comes on at the end with a 20-minute-plus speech on how we can be better human beings by singing and holding hands. The Follies is a community-cast variety program that delivers musical and hilarious gems. It’s half-camp. Half-serious. And half-something else since few are still able to count past their third vodka creation at intermission. This is one of those programs that gathers people who rarely make an appearance physically or emotionally. It will be a great way to reconnect with some folks who took the pandemic very seriously. I am personally looking forward to the comics who have lit up the room in past years. I’m talking about you, Gerri Louise.

The popular all male guesthouse ever so slightly opens the door to women on the “only” day of the year where “tatas” can freely mingle with “tiddlywinks” or whatever euphemism culture war zealots deem appropriate. It’s packed. It’s a soft reset for geospecific dating and hookup apps. And assuming it does not rain — as every other year or so — it is a festive and fun cocktail hour(s) that attracts characters who very quickly return to hiding for the rest of the social season. Can’t blame them. Summer is hot. So is this event. 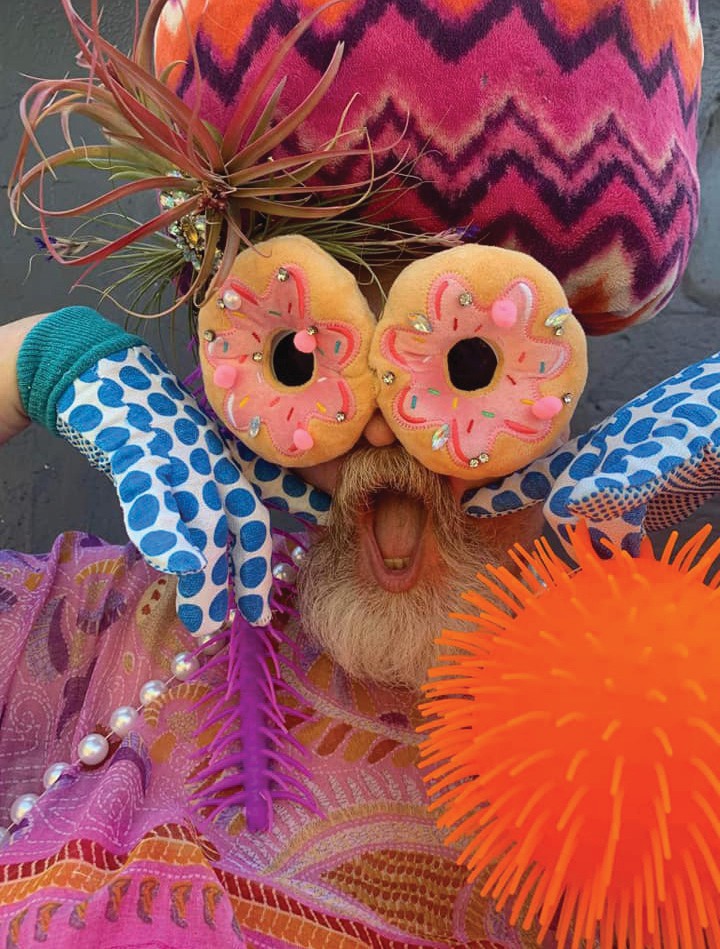 Support the queens. But outside. Where your vape and cigarette smoke will percolate much better than the inside of Duval clubs hosting one of several nightly shows throughout the week. 22&Co. and Poké in the Rear are partnering with Winslow’s Bungalows of Kimpton for a poolside ticketed unlimited brunch and champagne experience. Pop over to 504 Angela Street afterward, if you really do enjoy (edible) glitter in your beverage (11 a.m. Thursday, June 2, 745 Truman; $55). For a more traditional Sunday-style affair, Mangoes bar and restaurant will also host a rowdy drag show while you sip unlimited mimosas. Bonus if you stay long enough to catch the parade (noon Sunday, June 5, 700 Duval; $50).

Revelers carry the pride flag along Duval Street at a past Key West Pride Parade. This year’s is June 5. COURTESY OF LARRY BLACKBURN

Are You Wet Yet Pool Party

Love it. Easy to recommend. Here is a pool that is the right level of not-intimidating. The ambience is refreshing with its “are you really in Key West?” sort of Provincetown-Hamptons vibes. Plus, the crowd is always friendly. No one is taking themself too seriously as we size each other up in an attempt to figure out who’s long-term material and who’s just longing for conversation. There are nibbles, a DJ, prizes, and proximity to Island House for all the men who can only take so much co-mingling with the rest of the genders.

Gotta give it to Sidebar. One can actually shake their money maker proper at a legitimate dance club. With enough space to dance. A separate space for the bar. More than two bathrooms. And enough room that we can choose not to climb all over each other in a rave that isn’t happening. Yes, there are “glow” accoutrements. No, you do not have to smear your face in paint if your laundry schedule is not designed around social mishaps. But this is really about the dancing. Dancing poorly into the wee hours of the morning when the Lyft rates are high and so are many of you.

As the lesbian and female-oriented queer bars vanish like your thoughts on “The L Word”’s later seasons, it is nice — and fair — to have offerings for women. There are around three men only spaces on the island and a smattering of year-round and even monthly events that encourage testicular nudity. So, fair. The somewhat new Marrero’s Guest Mansion on Fleming is hosting a ticketed pool party (3 p.m. Friday, June 3). It’s pool access in summer with a DJ and hopefully very approachable gals. Another new feature is this year’s inaugural disco block party (5 p.m. Saturday, June 4), which takes place immediately after the day’s street fair on Duval. Block parties work rather effectively on the island. We already routinely shut streets down with jaywalking, golf carts, and wayward iguanas. Humans dancing to ’70s-’80s tracks that should definitely be remixed are a natural progression. It’s all in the gayborhood anyway.

Curtains up, legs out

There’s a “Fabulous Evening with Lillian Baxter” created and performed by John Vessels and Jay Schwandt at The Fringe Theater (June 1-4). There will be gay anthems, tales of less traveled roads, and hills. As in “the hills are alive with Lill.” That was from her website. One can appreciate that she describes her life’s trek as one to obscurity. Meanwhile, Joe Posa resurrects the absolute pillar of Fashion Police and comedic legend Joan Rivers at the Waterfront Playhouse (June 3-4). Even if you don’t sit up front, the QVC jewelry really should shine all the way to the back.

You can approach this from the perspective of “I’m in the parade or there will be no parade at all” or “Hats. Cold drinks. Lawn chairs. And SPF — lots of SPF.” Those opting for the former are encouraged to come test their level of endurance and curiosity by helping carry a large section of the even larger Sea to Sea Flag. Famous for once stretching the entire length of Duval Street (unlike sobriety). It can get interesting depending on the weather as you bring up the rear of the parade. But it’s a fascinating street’s eye view of the roving pageantry and confused onlookers who really had no idea Pride was happening this weekend. Little Timmy’s about to have quite the awakening. Alternatively, you can decamp to the sidewalk or an elevated bar like LaTeDa’s (which hosts Tea Dance immediately after) to watch the costumes, Cuban-adjacent cars, and occasional participant who’s giving up (on completing the parade, not just finding affordable housing). In case you missed it, the theme here is that Pride can get very warm in Key West. So, hydrate.

The iconic — and he really is a local icon — QMitch routinely turns piles of absolute dollar store mystery J-Lo plunging neckline fabric into bal-crushing get-the-hell-out-of-mama’s-way magic realness. A fabulous costume, in other words. He takes the mic and what’s left of the sanity in the room for two hours of drag bingo mayhem. I’m talking prizes that you may or may not want to regift depending on how religious the recipient is. The shots are free (when 22 calls). The game almost is ($5 a card). And it’s all for charity. This definitely makes my shortlist of the most absurdly funny events on the island. It’s also a great alternative to watching the parade in brutal weather for which SPF 20 is woefully inadequate.

One response to “A SENSE of PRIDE”