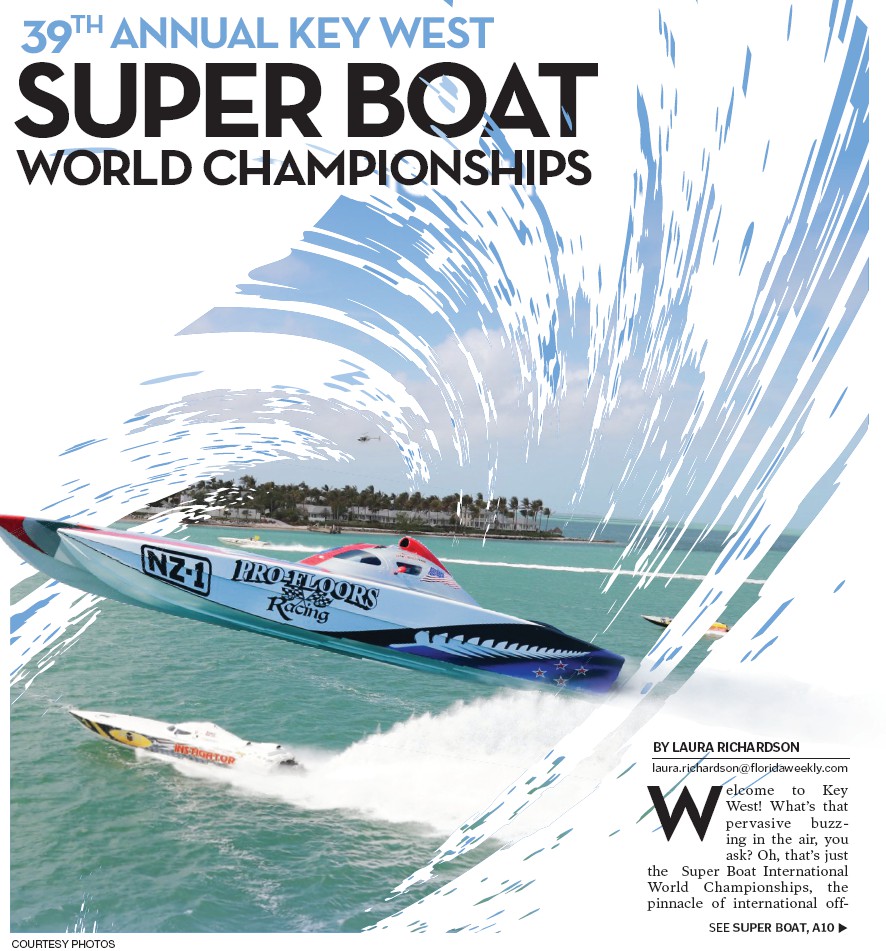 Welcome to Key West! What’s that pervasive buzzing in the air, you ask? Oh, that’s just the Super Boat International World Championships, the pinnacle of international off- shore powerboat racing. In other words, just your typical, high-powered weekend in Key West.

During the Super Boat International, the telltale whine of speedboat engines echoes around the island like a tiny, intraaural helicopter buzzing incessantly in your ear. And for those watching up close, the boats emit a conversation-obliterating roar to rival overhead Air Force bombers. To the untrained eye, the boats are colorful smears of supersonic speed, a series of blink-and-you’ll-miss-it machines cutting through turquoise water, leaving only a trail of white-capped wakes behind them.

They are beautiful to some, exciting to others, and a source of deep resentment to those who live by the waterfront and are jolted awake before brunch time by the sounds of revving engines and reveling spectators. But make no mistake: however you feel about them, the 39th annual Key West World Championship Super Boat Races are back from Nov. 6-10 — and you’re in for one hell of a thrilling ride.

A mere two weeks after the naked and painted crowds of Fantasy Fest have dispersed and returned to their cubicles and picture-perfect nuclear families, teams of powerboat racers from across the globe gather in Key West to race ludicrously, dangerously fast boats around our seven (ish) square mile island. These racers are the best of the best. They are the fastest and the few blessed with that rare combination of skills required to pilot something that resembles a missile far more than it does a boat, racing around a six-mile course through waves at speeds close to 200 mph. The entire event spans seven days and is often referred to as the Indy 500 of offshore racing.

Founded in 1989 by John Carbonell, Super Boat International (the governing body behind the Key West World Championship Race) remains the only producer of officially sanctioned national and international powerboat racing. Though relatively new in the world of sports, the company boasts a fan base of an estimated 20 million annual race attendees — a number they claim is expanding continuously, no doubt boosted by a mix of cross-over NASCAR press, magazine and film cameos and appearances by niche celebrities (lookin’ good, Kurt Russell!). 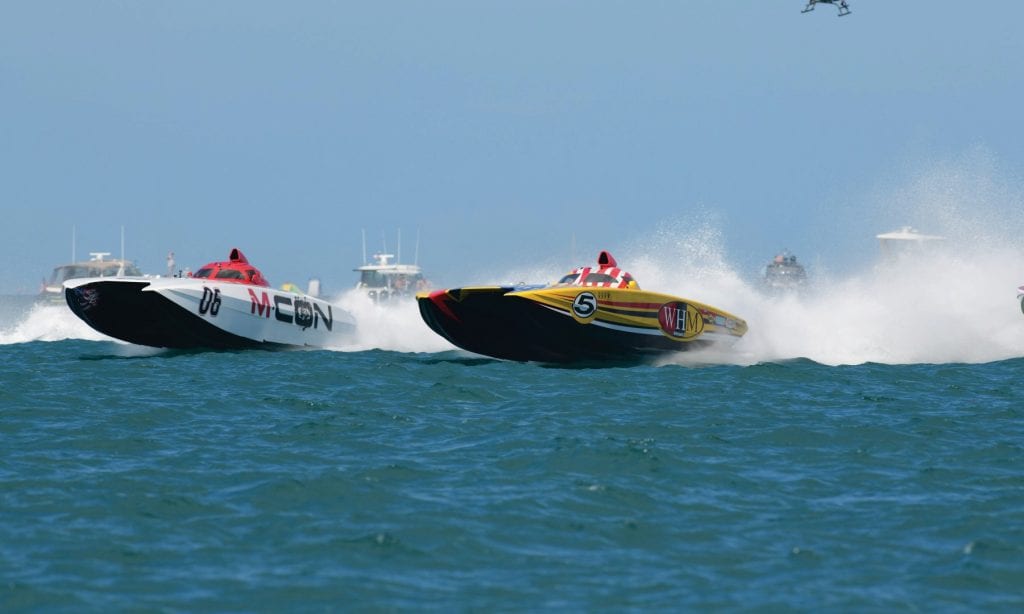 During the Key West World Championship Race, boats compete in multiple races across a variety of class divisions, including Production 3, Superboat Extreme, Superboat Unlimited and more categories that mean nothing to the layman and everything to the enthusiasts. The over-the-top Key West World Championship week ends in a ticketed award ceremony on Sunday evening, hosted by the Key West Marriott Beachside Hotel.

As with all Key West event weeks, Super Boat week has its own unique trajectory. First, the trucks bearing the superboats arrive; a seemingly endless parade of boat-toting tractor trailers roll down U.S. 1, hauling their flashy, rubberneck inducing cargo. Once they reach the island, the boats and their racing teams decamp to “Race Village,” a bustling display of some of the fastest boats in the world that materializes magically each year at the Truman Waterfront at the end of Southard Street.

Diehard fans and curious newcomers mingle together, making their way across the waterfront to gawk while racing teams pop open the bow of each boat like a hotrod car on display, allowing passersby to inspect the gargantuan engines inside. There’s music, food and usually a handful of bikini-clad babes draped across a boat or two (or all of them – sometimes it’s hard to tell whether the babes or the boats are the real draw). The whole thing radiates a frenetic, restless energy, and with good reason: by the time the first set of races begins on Wednesday, Nov. 6, each team will have undergone extensive inspection to prove they are ready to face one of the most infamously challenging and dangerous boat racecourses in the world, and to compete for the title of fastest powerboat team on the planet.

Because Key West loves nothing more than a parade, the week began with a formal procession down Duval Street on Sunday, Nov. 3, where the boats and their crew made their way down the closed-off street to a chorus of cheers and stupefied stares. Then it was back to Race Village until Nov. 6, with fueling, testing, open display hours and a few parties thrown in to pass the time, like the official Welcome Party on Monday, Nov. 4.

Once the actual competition has begun, the races themselves make for riotous days of deafening, adrenaline-promoting fun — that is, unless someone gets hurt. And when you’re carving up the ocean in a 1,200-horsepower boat going upwards of 180 mph, accidents of any kind can be deadly. In 2011, the death of three longtime Super Boat racing veterans sparked concerns that the dangers of uncontrollable variables like wind speed and wave height were too great to continue the competition in Key West. Dedicated fans of the sport were quick to point out that, statistically speaking, visiting race crews were more at risk of a fatal crash during their drive down U.S. 1 than they were at sea, and so the races have since remained an annual pilgrimage for competitors and spectators craving high-octane entertainment.

To best explain the attraction, understand that the Super Boat Championships are basically the aquatic Kentucky Derby of South Florida. Both offer a great excuse to stand around in the sunshine while screaming (a very Key West pastime, with or without an excuse); both are devoid of the noxious fumes present at NASCAR, the other Southern excuse for an all-day tailgate; both draw speed-loving crowds looking to day drink and perhaps engage in a little illicit sports gambling; both host competitors with truly ridiculous names (though let’s be real: in a competition over whose moniker is strangest, 2019 Kentucky Derby winner Country House has got nothing on this year’s Superboat Vee challenger team Hurricane of Awesomeness). And both promote an unapologetic display of wealth and drama.

As the Key West World Championship race is the culmination of an entire season’s worth of competitive racing, the stakes are palpably high, and, thanks to its unique course layout, fans are often able to get within mere yards of the action as the boats scream their way through Key West Harbor. (Apologies to any of you staying at the Margaritaville or Hyatt resorts on the waterfront — I recommend limiting your late-night drinking so as to avoid a rude boat-prompted early morning mid-hangover awakening.)

As usual, popular watersports company Fury has set itself apart from the crowd as the go-to place for the most dedicated fans to get in on the action by offering an all-day catered catamaran trip on Nov. 6, 8 and 10; anchored at the end of the racecourse straight, passengers are able to view competing boats as they speed toward them in a mile-long straight. The boats must actually make their turn around the catamaran (officially called a “turn boat”) in order to begin the journey back to the finish line, meaning Fury passengers are essentially inside the race itself.

It’s an exhilarating experience to be sure, but not cheap; turning boat tickets hover around $100 and tend to sell out quick. If you don’t want to shell out that much dough and you’re content to just watch the action from a slightly further distance, Danger Charters is also offering a viewing boat experience for $90, which includes beer, wine, soft drinks and a fully catered lunch. And while many dockside restaurants are quick to take advantage of the added demand the races bring, swapping out their à la carte menus for exorbitantly priced prix fixe ones, the rest of the catamaran-less, prix fixe-averse plebeians must duke it out for the best viewing spots along the Truman Waterfront, Mallory Square, harbor front hotel piers and Fort Zachary Taylor beach.

Unlike the ten days of debauchery before it, the Super Boat races are a decidedly family-friendly event. On offrace days, boat crews can usually be found hanging out in Race Village, happy to discuss their team’s provenance and the mechanics of their respective vessels to inquisitive children and parents. And with tickets starting at $15 (and free for children), the races make for an unusually affordable option for those families looking to avoid cries of boredom from children dragging their feet through downtown museums and historic sites.

If the excitement, potential danger, and the crazy-affordable ticket prices aren’t enough to convince you to give the Super Boat races a try, a glance at photos from last year’s competition might do it; birdseye images show boats that seem to float above the water, some completely airborne, their breakneck speed obvious even when captured by still photography due to the blurriness of the landscape around them. These are clearly not your granddaddy’s boats. There are no chubby, lumbering lobster boat profiles among the bunch.

With hull shapes like something out of a NASA test lab, they are undeniably cool looking, all needle-sharp bows on sleek, neon bodies. As a fleet, they are totally ludicrous; obviously impractical, garishly flamboyant, something out of a super sexy James Bond film. Next to the ancient Coast Guard Cutters and creaky wooden schooners usually spotted around the Key West coastline, the super boats are almost alien in comparison — the perfect representation of humanity’s endless quest to fling ourselves forward as fast as possible toward a finish line of our own arbitrary creation.

True, some crotchety locals may gripe about the noise and the traffic, but place yourself amongst the crowd gathered to watch Sunday’s final races and you’ll be sure to see just as many residents as out of towners gathered together, all happily squinting into the sun, fingers-in-ears, their cheers drowned out by the sound of the world’s fastest boats racing blazingly quickly across the horizon.

For a full list of scheduled events, competitors, and a collection of whiplash inducing videos of previous years’ races, visit www.superboat.com. If you can’t make it to watch the races in person, the Key West World Championship will be streamed live on www.livestream.com/sbi. ¦